Car seats for babies and children

by the editorial team Published on 17 October 2008 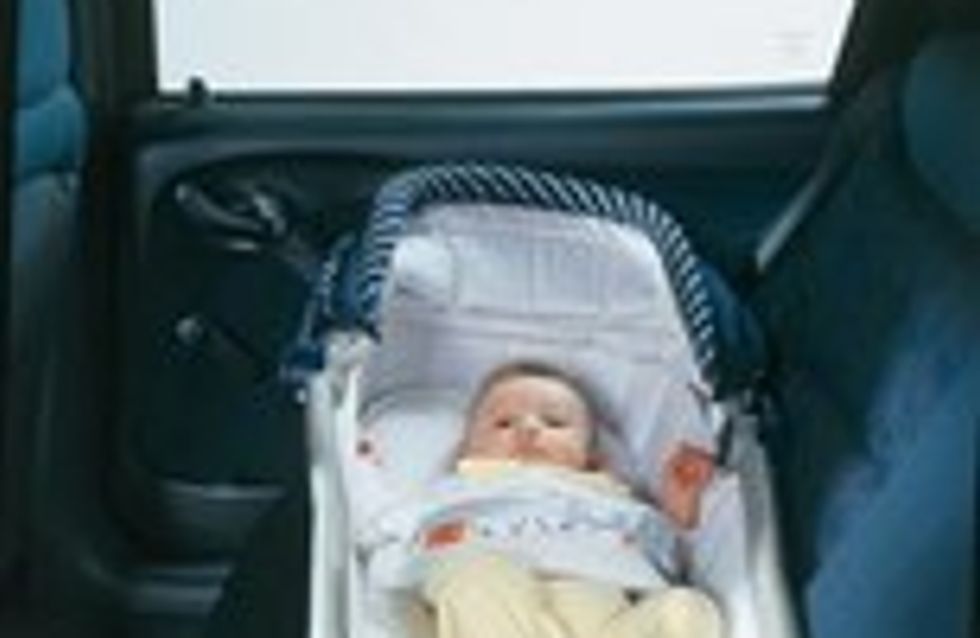 Babies and children require special protection in the car, but not just any old car seat. Here's our guide to the different types and advice on how to choose the right car seat for your young passengers.

Why are child seatscompulsory?
Standard seat belts fitted in vehicles are designed for adults and children over 1.35m tall. It’s absolutely essential that smaller children are fastened in with the correct restraints. Never hold your baby or child in your arms or sit them on your lap, even on short journeys. In the event of an accident, you wouldn't be able to protect a child or stop him or her flying out of your arms, as their weight would multiply by 6 or 7. Car seats also spread the impact over the most resistant parts of the body.

How to choose a car seat
The first thing to do is to check the label. An “E” and “44.03” (or higher) orange label indicates that a seat meets European standards. Next, choose a seat that is right for your child's weight. Car seats are divided into five categories, numbered from 0 to 3 (0, 0+, 1, 2 and 3):

Note that seats that only fit into Group 2 or only into Group 3 are no longer produced. Today, seats are designed for children weighing between 15kg and 36kg. These categories are designed to allow for growth, but they are only a rough guide as children's weight varies. If your child is in between two categories, try out different seat manufacturers to see which suits your child's body shape best.

Group 0 and 0+: under 13kg / approximately 0 to 12 months
These are backward-facing baby seats fitted in the rear or front of the car with an adult seat belt. If you fit it in the passenger seat, make sure the passenger airbag is deactivated. It's not advisable to leave babies in a car seat for more than an hour and a half because of potential back and breathing problems.

Note:
If your baby was a low weight at birth or was premature, think about buying a special baby carrier that fits into a baby seat and provides tiny babies with extra safety (from jolts caused by potholes, for example). A hood over the car seat will protect your child from the sun and mean it can be used outside of the car.

Group 1: from 9 to 18kg / approximately 9 months to 4 years
A forward-facing child seat, which is placed in the front or rear of the car and fastened in place with an adult seat belt or via the ISOFIX system (see below). Because your child faces forwards, they can see the road ahead, making journeys more interesting! Look for a model that you will be able to use for several years, for example, one with an adjustable back rest, adjustable incline angles, a long enough harness, etc.

Group 2: from 15 to 36kg / approximately 4 to 6 years
A booster seat that is placed in the back of the car. The child is restrained directly by the adult seat belt but they are raised in order for the belt to go around them more safely. Make sure the seat belt is correctly adjusted: it should be worn as tight as possible; the lap belt should go over the pelvic region and not the stomach; and the diagonal strap should rest over the shoulder and not the neck, otherwise your child could be hurt if you have to brake sharply. Armrests give added comfort.

Note:
Never tuck a seat belt under your child's arm. In the event of an accident, this is very dangerous.

Group 3: from 22 to 36 kg / approximately 6 to 11 years
A booster cushion can be used instead of a booster seat from 22kg upwards. Booster cushions and seats work on same principle.

Once your child reaches the age of 12 or becomes taller than 1.35m, an adult seat belt on its own is sufficient.

Car seat fastening systems
Traditionally, car seats are fastened to one of the car’s seat belts; but since 2006, the ISOFIX system has been fitted in all new models. This system has three anchorage points built into the car, which allows the car seat to be fastened directly to the car’s framework. It makes installing a car seat easier and reduces the risk of incorrect installation. Make sure you try out car seats in your car before you buy. Don’t forget that you will have to fit and remove them a lot, so go for one that you find quick and easy to install.

Tips for travelling with children
Over time, as children get bigger, they become more and more fidgety and dislike having to sit still for long periods! Don’t let them get the better of you though: suggest games to keep them occupied and take regular breaks. Get your child used to settling down in their seat as soon as they are in the car. Be vigilant with brothers and sisters who might inadvertently detach baby from the car seat by playing with the straps and fastenings. If you are involved in an accident, replace the seat. Even if it doesn’t appear to be damaged, it might have sustained extremely small cracks and defects which are invisible to the naked eye, but which weaken the seat and could reduce its efficiency in the event of another accident.