by Lareese Craig Published on 7 December 2015 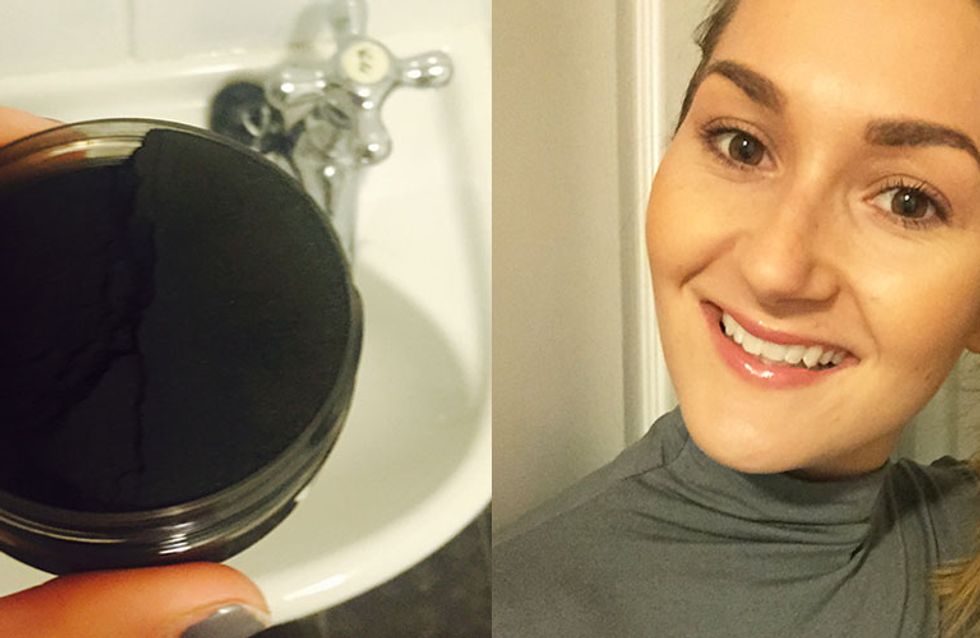 Just like a good night out, whitening our teeth with black charcoal was messy but totally worth it

If you despise scrubbing those unsightly stripy toothpaste blobs off your bathroom sink, then black charcoal whitening probably isn't advisable.

With charcoal being the beauty trend du jour, we were extremely intrigued to see how Diamond Whites 100% natural black charcoal polish scrubbed up against other more aggressive whitening methods.

Black Edition is made from 100% activated coconut shell charcoal and formulated to strengthen your gums, remove nasty toxins from your mouth and absorb bacteria for a cleaner, whiter *Hollywood* smile.

Thanks to its purifying and adhesive properties, charcoal is able to bind with surface-staining culprits such as coffee and red wine. In fact, it has been used for centuries to shift stains and even treat severe poisoning by drawing the toxins together and preventing any further absorption into the bloodstream.

Confession. I didn't use it twice a day as recommended. In fact, I probably used it once every other day for a fortnight, partly because I forgot but mostly because I cba with all the faffing.

First off, I dipped my *wet* toothbrush into the pot of charcoal. Let me just emphasise that this should not be done with a dry toothbrush unless you want to emulate the cinnamon challenge. And yes, I did find this out the hard way.

Next I got to work on polishing up my gnashers which largely involved getting a whole lot of black soot all over the sink and in between my teeth. Even my boyfriend made a point of telling me I looked like a witch. Charmer.

I would also like to apologise in advance for my horrible bathroom lighting and that weird smile. I wanted you to see all my pegs which apparently resulted in me looking like a threatened baboon.

The polish doesn't have any particular taste, it just feels sooty and gritty against your mouth, as you'd expect if you're filling your gob with powder.

I brushed my teeth as normal - in circular motions for around 2-3 minutes before ya know, spitting it all out. You need to do about three or four rinses before your saliva runs clear but that just goes to show how much of a good job the ol' charcoal is doing of binding itself to all those nasties.

I found the whole process unusually satisfying and when I consider the benefits of using a 100% natural product such as this one (predominantly leaving your enamel in tact!) I don't think I'll ever be without it.

As you only need a little bit at a time it lasts forever and for that reason it's probably a much better way to part with your precious toiletries allowance, even if forking out £14.99 doesn't feel like it initially.

​While I was using the product and sticking to it, I did notice a visible difference. I got into the habit of running my tongue across my teeth after using itbecause they felt so much cleaner and smoother than usual.

Even if they didn't look Essex white, they were certainly cleaner and their natural British dullness was brighter and more consistent in colour.

Admittedly, I did follow up with a minty toothpaste afterwards because even if it does tackle the stubborn evidence of red wine, it doesn't do much for coffee breath.

Our verdict... The Only Way Is Charcoal!

What do you think about whitening your teeth the natural way? Tweet us @sofeminineUK!

Cinderella Lips?! We Put The New Temporary Lip Fillers To The Test

Eyebrow Extensions Before & After: Why We HAD To Try This Beauty Treatment!