Alesha Dixon has enjoyed a successful career, first as a pop star and now as a reality TV judge. But it hasn't all come easy for her. Alesha has revealed to Cosmopolitan that she's in a constant fight against racism and wants to see more black women on prime-time TV. (Photography by Peter Pedonomou, courtesy of Cosmopolitan)

Alesha Dixon has opened up about her fight against racism.

​The singer turned reality show judge - who was born to a Jamaican father and an English mother - argues that there are still too few black women on television.
​
She told Cosmopolitan magazine: "There still aren’t many black women on prime-time TV. Times are changing, but it’s interesting we’re in 2013 and still experiencing firsts.
​
"Hopefully in the next 100 years things will balance even more. Britain is an amazing multicultural place to live in, and that should be celebrated and represented."
​
The 34-year-old added: "Sadly, I’ve learnt that prejudice still exists in parts of the entertainment industry - I did an interview with a magazine once and the journalist quite openly said they wouldn’t put a black person on the front cover because the magazine wouldn’t sell.
​
"It made me angry because it shouldn’t be about the colour of the person’s skin, it should be about the person."

Despite this, Alesha has forged a hugely successful career for herself since her days as a pop star - she was a judge on Strictly Come Dancing for three years and is now on the Britain's Got Talent panel.

​As a star of prime-time TV, Alesha is a great role model for young black or mixed-race women fighting against prejudice.

She continued: "When I joined the Strictly Come Dancing panel in 2009, the controller of the BBC came into my dressing room and said they were proud to have a woman of colour on their panel. It was so nice that they acknowledged it.”

Alesha - who was inspired by singer Neneh Cherry growing up - admits her dad doubted she could have a successful career in the entertainment industry when she told him she wanted to be a singer.

She revealed: "He said, ‘What makes you think you’re going to succeed? Black people from this country don’t succeed.’
​
"I remember that conversation as if it was yesterday because he was right - if you looked at the UK charts at the time there weren’t many black British artists selling records.

"But I’ve always said you can’t use colour as an excuse. I had to do what was right for me. In a way that gave me the determination to work harder."

She continued: “When we formed Mis-Teeq we were struggling for money for five years. We took a risk and we worked hard to pull it off.

​"We were a minority and a girl group against the odds. We never had loads of money thrown at us or went to stage school. That made success so much sweeter."

Though Sabrina and Su-Elise have faded into relative obscurity since the band split in 2005, Alesha's career has blossomed since she won Strictly Come Dancing in 2007.

She added to Cosmo: "Since I turned 30, I’ve never felt better in my own skin. I feel positive about getting older.

"I don’t worry about the future because that will take care of itself. I don’t carry around past baggage because what’s that going to do for me? We only have now.

"The fact that I’m still working in the industry now, 10 years on, is something I’m so thankful for. There is no door you can’t open."

The full interview appears in the May issue of Cosmopolitan, on sale 4th April (also available in digital edition). 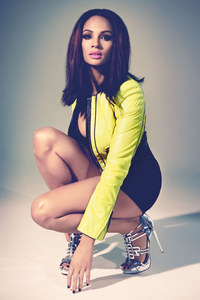 Esme Riley
…
Britain's Got Talent
From hair ideas to outifts, look no further for your daily inspiration