by Pascale Day Published on 16 November 2015 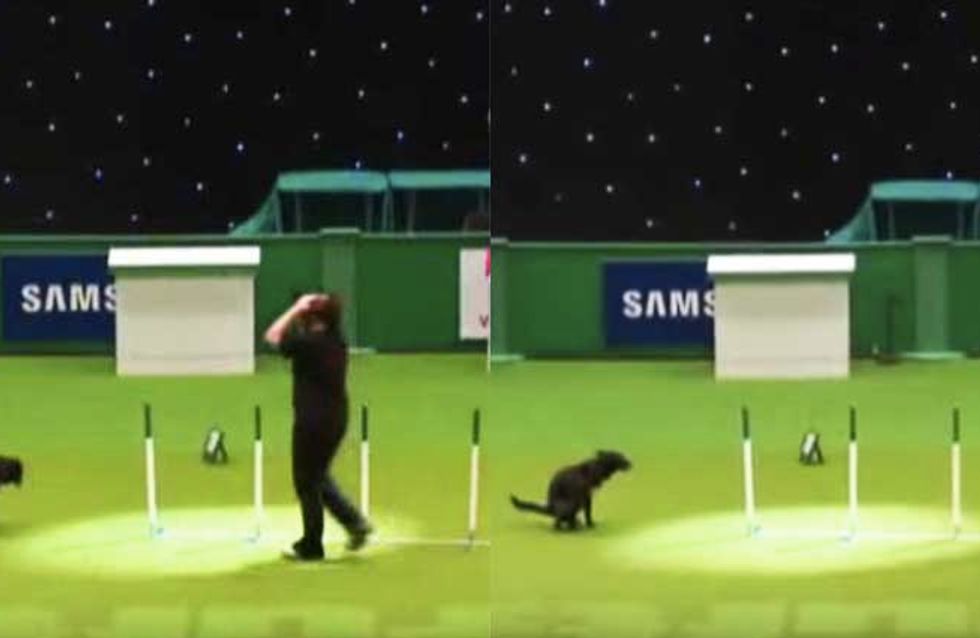 Dogs are supposed to be a man's best friend, but sometimes they'll settle for frenemies. This dog has no interest in pleasing her master, especially when it comes to competing in Crufts. That's right, Libby the dog went and did a Gary Lineker - she pooped mid-comp, disqualifying her and her owner. It's the dirtiest kind of protest.

Libby, the five-year-old cross-breed, knows that when nature calls, you just gotta answer. Seen in this 2012 clip from the dogfest that is Crufts, Libby starts well. Speeding along with her owner, she makes good progress through the course of play tunnels and teeny tiny walls to jump over. But, right before she tackles weaving in and out of the poles, she rather abruptly stops and squats. And everyone knows that exercising when you need the toilet is near on impossible - just ask Paula Radclliffe.

Despite Libby's disqualification from the competition, she still manages to garner sympathy from the understanding commentators: "A dog's got to do what a dog's got to do. What a shame." Plus, despite the reaction of Libby's owner, as she raises​ her hands to her head in dismay, the old dog seems quite happy to have, ahem, relieved herself... Little did she know her actions had disqualified her and her owner from continuing any further in the competition.

​Unfortunately, it's up to her owner to clean up the mess she caused, as Crufts' equivalent of a ball boy stands up and hands her a plastic doody bag to put the poop in. Not the most graceful exit from a competition we must say, but certainly not the worst...

Do you feel for Libby's owner? Tweet us! @sofeminineUK

17 Things You Should Never Say To A Dog Lover

The Most Epic Viral Dog Videos Of ALL Time