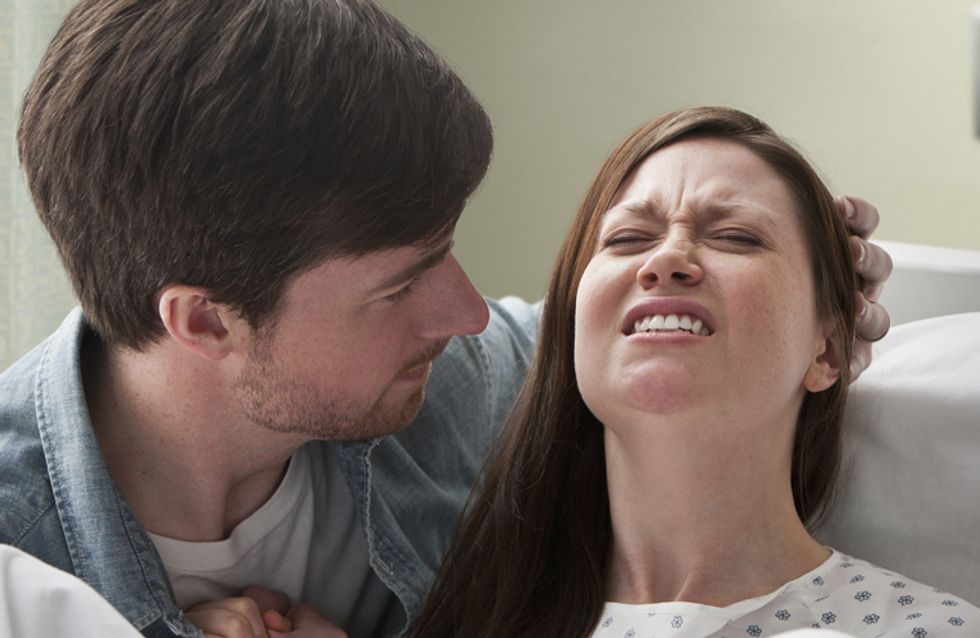 Anxiety can spike in the months before women, particularly first-timers, give birth. Labour is one of the most stressful processes the human body goes through. Luckily, Mother Nature recruited the one gender strong enough to withstand this pain and handle all the yucky, not-so-cute parts of birthing babies.

Giving birth is scary. No one can convince us otherwise but the outcome (BABY) is so rewarding that women continue to grit their teeth and get through the pain again and again. We spoke to Gemma Raby, a midwife who stars on Channel 4's One Born Every Minute, and Margaret Vose, a Certified Registered OB/GYN Physician's Associate at Mount Sinai Hospital in New York, about the realities of labour and what women can do to cope.

"Labour is frightening for many women because it is an unknown event," Raby begins. "There is no way of predicting how the labour will progress and how long it will take." True! Delivering a child could take up to eighteen hours, but we all know a friend of a friend of a friend who was in labour for 36!

As a woman's delivery date draws closer, she juggles a multitude of emotions knowing that the only way her pregnancy journey is going to end is through an intense labour that will test the limits of her emotional and psychical stamina. One way to cope is to know exactly what's going to occur, even if it's not so fun to hear...

No, seriously, get your bedrest

"Bedrest" isn't just a throwaway piece of advice your obstetrician hands out after every visit. In the weeks leading up to your due date, sticking to a restful sleep schedule will help you handle labour and, hopefully, follow your birth plan to a T, especially if you don't want pain medication.

"Sleep deprivation is the main reason why women feel less able to cope in labour," Remy warns. "[They] may eventually choose stronger pain relief, such as an epidural, that they may not have initially wanted." We know the last few weeks will leave you feeling jittery and wide-eyed with anticipation but get to sleep at a reasonable hour each night. Your body, baby, and sanity will be better off for it!

Your midwife is there to support what YOU want

If you opt to have a midwife or doula but are also considering pain meds or feel the sudden urge to give birth on a bed, don't stress that your childbirth guru is going to vocally disagree with your choices. "An important aspect of midwifery is low intervention," Vose assures.

"Midwives work as advocates for the women they are caring for," Raby echos. "We provide insight into the various options available [and] then help our patients and their birth partners make their choice."

Worried about what she'll say if you change your mind about your water birth? Fear not, says Raby. "Water births are amazing but not necessarily an option that all women would want or be recommended to have if high risk."

Your water breaking may be anti-climatic

When a woman's water breaks in the movies, it's like the Hoover dam bursting opening, and that does occur in real life. "Sometimes the waters can break with a huge gush - this is often if the waters in front of the baby's head (forewaters) burst."

However, women also experience a slow trickle "when the waters behind the baby's head (hindwaters) break." Vose agrees: "Most women present to the labour floor saying, 'I think my water broke...?'"

Either way, the presence of amniotic fluid means IT'S TIME, WOMAN, IT'S TIME!

Take a good look at your amniotic fluid

Amniotic fluid, which "is usually clear or pale pink and has very little smell," provides more information than simply it's baby time!

If you sense that something is off with the odor or opacity of your fluid, something could be wrong. Raby provides some warning signs: "Red fluid may indicate bleeding [and] brown or green may indicate that the baby has opened its bowels inside and passed meconium[...] a strong or offensive odor to the fluid may indicate an infection."

Make sure you let your doctor know anything that troubles you about the amniotic fluid.

Docs might open you up wider to help the baby out

Sometimes doctors have to surgically intervene if a baby is having difficulty being born. "An episiotomy is a cut which is made to the perineal muscle - the area between the vagina and back passage," Raby explains. "It is used in times of fetal distress to allow the baby to be delivered more quickly, if there is not enough space for the baby to be born or if the baby is being delivered with ‘instruments’ such as a ventouse cup (suction) or forceps."

You're definitely going to feel some throbbing pain down there but Vose has some good news - "Vaginal tissue heals amazingly well because it so well vascularized in pregnancy and postpartum, meaning great blood supply."

We're not feeling overly reassured either. Cutting?! NO!

In recent years, water births have emerged as one of the most (relatively) comfortable ways to usher a child into the world.

The journey from the womb to water is less stressful on the newborn but the benefits for a mother are quite amazing. One of them includes decreasing a woman's chance of tearing, leading to a quicker and less painful recovery.

Don't rush to the hospital during early labour

"Again, I don't think Hollywood has done us any favors by making it seem that labour is fast and that a woman should go to the hospital at her first contraction!" Vose says. "We often tell our patients that the appropriate time to come in is when contractions are five minutes apart for two hours."

You'll have waste coming out of both ends

It's now a well-known fact that women in the midst of childbirth experience bowel movement "during the second stage of labour when the cervix is fully dilated and the baby is moving down the birth canal,
says Raby. It's no biggie - delivery nurses clean it up quickly.

However, vomiting is also a common response to birthing as well. "When the uterus starts to contract regularly often other body systems slow down. This includes digestion[...]resulting in nausea and sometimes vomiting, especially after a heavy meal." To lessen the chances of throwing up, Raby suggests a "light diet of oral fluids and limited carbonated drinks" when you first show signs of early labour.

You're going to shake when it's nearly time to push

"We often see uncontrollable shaking during labour and its closely associated with the transitional stage - this is the body moving from the first stage of labour to the second." But should you be worried if you're trembling so much you can't even hold your partner's hand? Nah! " It’s a normal sign, often meaning the birth is not far away."

Although we're designed to guide babies into the world it can still be a quite risky for the newborn, especially when it gets to the end of the ride and she needs a little help getting off.

Unfortunately, Raby says, "common injuries are damage to the collar bone or clavicle." Poor baby! "The other injury most often seen is a brachial plexus injury. This is damage to the bundle or nerves that run down the side of the neck." Neonatal nurses are trained to immediately recognize these injuries and treat accordingly, but we can only imagine how upsetting that'd be for both mother and baby.

Who knew that eating during labour was such a hot button issue. God, to deny a labouring woman some mac and cheese sounds like a criminal offense!

Raby supports women having a little grub. "During a low risk pregnancy and labour women can eat and drink if they choose," but some medical professionals would rather you stick to fluids. "In the hospital setting we advise women in labour to only drink fluids," Vose says. "Broth, jell-o, and popsicles are OK too.

It probably comes as no surprise though that eating is not at the forefront of a birthing woman's mind. The biggest concern is getting that baby outta there!

Having an orgasm isn't out of the realm of possibility

It might send some skeptics into a tizzy, but women have been talking about the abrupt pleasure felt during labour for decades.

French psychologist, Thierry Postel, provided some hard data to legitimize the delicate dance that occurs between pain and pleasure while a woman's giving birth. By consulting midwives, he discovered that many women experience ecstasy or "orgasmic sensations."

Before you go, WHAA? Remember that a woman has intense pressure on her vaginal canal for the entire ordeal, her partner - who helped create the baby - is cheering her on, and she is anticipating meeting the little bugger that grew in her tummy for nine months. That level of intimacy, the rush of emotions, the physical roller coaster a woman straps herself in to could absolutely lead to a truly sensual experience!

Drifting to another plane of consciousness is normal

In order to get through labour, women fold into themselves, they become their own biggest cheerleaders, and have mental conversations that keep them going and pushing and waiting.

Natural pain killers or endorphins build up as women urge themselves to relax, and some women find themselves zoning out and forgetting that other people are in the room.

Your baby responds to your labour vibes

We'll never, ever know what a baby's thinking the moment it opens it eyes and sees...well, nothing really - newborns are practically blind, but the sudden transition from a warm, gushy uterus to colder temperatures and harsh light typically causes them to cry.

Yet, Raby says, there are other factors that may change how a baby reacts to her new settings. "The way a baby behaves immediately after birth can depend on the type of delivery, the levels of stress hormones present during the pregnancy and also if any drugs have been used during the pregnancy or labour, including some prescribed medications."

"That cheesy substance in the folds of the baby's skin is called...

...vernix," says Vose. It's mostly just dead cells and and sebum secretions that protect the fetus...and know you know the answer to the final question on Who Wants To Be A Millionaire.

You're going to have contractions forever!

...Ok not forever but after possibly being in labour for a few hours, the thought of another contraction is going to bring on some postpartum tears. When the baby is born "the uterus needs to gradually return to it's non-pregnant size," which means...more contracting.

"This process is called involution," and unfortunately, "[it tends] to be more painful when it's not [your] first baby." The upside is that mild pain meds and heat therapy can ease you through this grueling post-birth stage.

If you're still afraid of labour, Vose has some consoling words: "Picking the right delivery team by surrounding yourself with people you trust is my biggest recommendation."

Raby also believes that the reward of having a child in your arms will help you overcome any fear. "There is no way of predicting how the labour will progress and how long it will take. However, it is also a tiny amount of time when compared to the time you will spend with your child afterwards."

"From there," Vose says, "you have to go with the flow, listen to those you trust, and learn to embrace the messy fun of it all: it's actually a great metaphor for parenting too!"

How did you handle your labour? Tweet us @sofeminineUK!

Got a question about childbirth? Ask Gemma Raby via Project B's Facebook page where she does a regular Q&A about everything to do with pregnancy and labour.