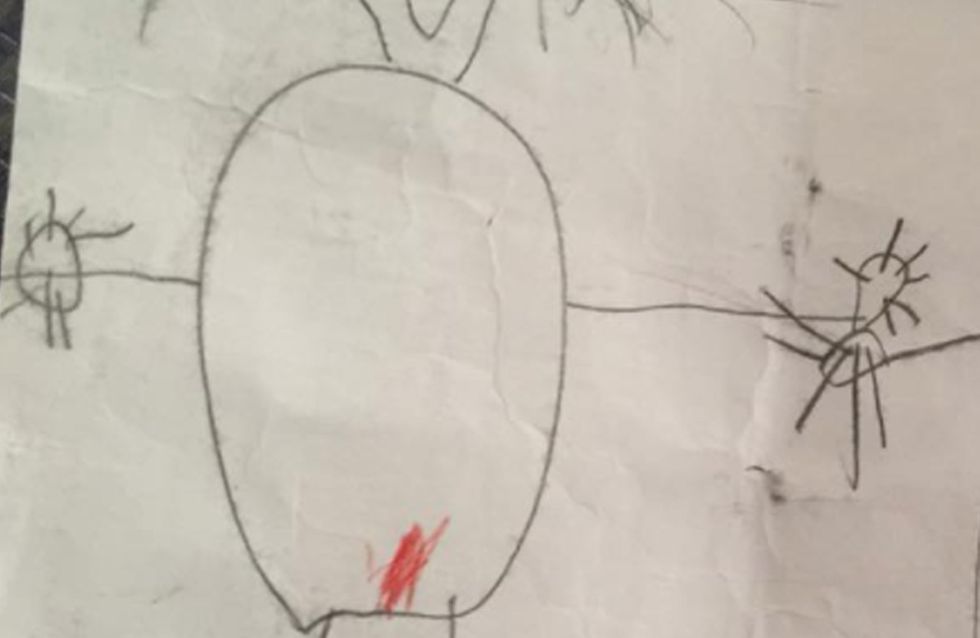 In a world where we're discouraged from talking about the monthly - and totally natural and vital - phenomenon that is the female period, it's refreshing to know that the young generation are breaking that taboo, without even knowing it.

Kids do the funniest things but can you imagine the hilarity and pride that'd ensue if your little boy came home from school one day with a drawing showing you on your period? That's the situation proud mum Penny Rohleder found herself in recently.

The photographer from New South Wales, Australia, was left in hysterics when her five-year-old son Julian returned home with a family portrait with a difference. The youngster had sketched members of his family but it was his depiction of his mum that caught her attention - her portrait had a red scribble in between her legs which at first confused her.

Sharing the image on Facebook, Penny captioned it: "Oh this is so funny. Julian drew a family portrait (forgot Mayanna and Arlyn) but I said to him, 'what's that red thing on me?' He said, 'that's your period'. Bahahahhahahahahshahahaha."

Penny said she couldn't stop laughing when little Julian blurted out that but admitted there was a poignant significance to the picture, telling Metro.co.uk: "I shared it because it was funny, but I was also proud that my five year old knows what a period is, when some fully grown men do not. It’s such a taboo subject for many adults, especially men. Women too, are embarrassed about their bodies and I have absolutely no idea why."

Penny has since revealed she suffers from pulmonary embolism, forcing doctors to prescribe her blood thinners which makes her periods heavier. Recalling a particularly bad moment, she told the MailOnline that recently it was so heavy she had no choice but to jump in the shower to clean up while her son was on the toilet.

She added: "Jules was super concerned, but he knows about periods - kids follow you to the toilet every chance they get - and so he just kept asking me if I was ok."

Penny's post on social media has prompted parents to share their similarly hilarious concerning their menstrual cycles with one writing: "I went and got a blood test when Mr. 8 was about 3 or 4. He told the lady that if she couldn't get enough out of my arm she could probably get it from my front bum because it bleeds sometimes..... I nearly died."

Another added: "My four year old son yelled at me from women's Heath section in chemist the other day. Do you need any of these for your vagina mum? I turned around and he had a packet of pads. Not today baby, not today!!"

Have your kids ever said anything funny about periods? Let us know @soFeminineUK

The Hairier The Better: Pubic Hair Transplants Are Now A Thing In Korea

26. Page boy
by the editorial team