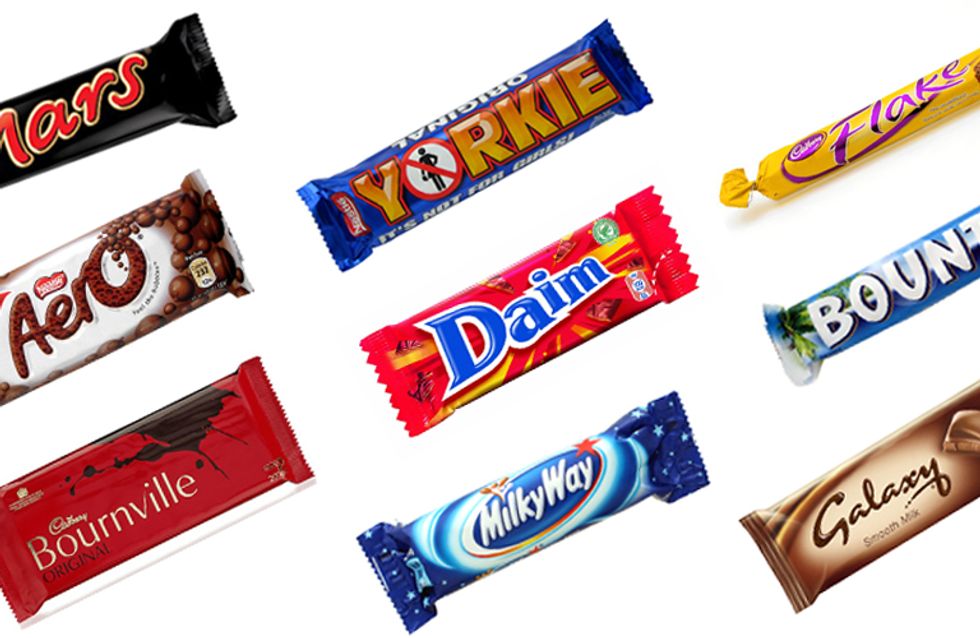 Since it's Chocolate Week this week we've decided to honour it the only way we know how: by harshly judging popular chocolate and putting it in its rightful place. Here's the unofficial but entirely accurate definitive ranking of British chocolate bars...

There’s a reason that these are the pitiable leftovers in every box of Celebrations and that’s because the Bounty bar is the Devil’s work. It’s the chocolate bar that your sweet yet clueless grandparents bought you because bless them, they didn’t know any better, and you had to choke it down to make them happy whilst all the way feeling the soft, flaky and vastly unpleasant crunch of the coconut forcing its way into your life and soul. Bounty doesn’t rank high on our list. Not today Satan.

Bournville is like the chocolate for people whose favourite ice cream flavour is Rum Raisin and favourite sweet is the Worther’s Original. It is a draconian chocolate that no longer has a place in this world, especially when there is so much more delicious chocolate to choose from. I know one person whose favourite chocolate is Bournville and that person is no longer my friend since the discovery. People who love Bournville have not explored life enough and are therefore not to be trusted.

Chomp is just a disappointment. Chomp is that chocolate bar you used to get in a party bag. You could have gotten good chocolate from that mixed bag but, no, you were that fool that was landed with a Chomp bar. Not only is it 95% caramel and 5% chocolate, you also have to resort to caveman instincts when eating it and gnaw at it like your ancestors gnawed on animal carcasses.

What’s the point of Aero? Who cares if it’s bubbly? Bubbly means less chocolate without tasting any different from a bog standard Dairy Milk bar. Aero’s are the useless chocolate that has no friends and sits alone in its room commenting on YouTube videos on a Saturday night. Get a life, Aero.

I have nothing to say about Fudge and that alone sums it up. It's fine. It'll never set the world on fire, it's just a Fudge. It's not the best chocolate bar you've ever eaten, because it's a simple Fudge. You don't hate it, but you don't love it. It's sustenance. It's fine.

Curly Wurly’s get chocolate flakes everywhere and it’s not even worth it. They’re a waste of time and an insult to the good name of chocolate. If you like Curly Wurly's you are weak and shall not survive the winter.

This one all depends on how much you like the honeycomb. If you are honeycomb kind of person, Crunchie has everything you could ever want. That being sad, it's honeycomb velocity can also make it a very scratchy chocolate to eat and can make your mouth kind of sore, especially if you eat five in a row like I definitely never have.

Similar to the Curly Way, the Flake is unnecessarily nightmarish to eat. That being sad, it doesn’t have any teeth breaking caramel and it takes really freaking good in a Mr Whippy. Mmmm.

See Flake (but with a layer of chocolate over the top making it slightly better). Moving on!

What is it about this standardly rubbish chocolate bar that makes it SO freaking good? This chocolate bar is the one you would always get in your packed lunches and after school with a glass of blackcurrant squash. It is a modern classic, like The Shawshank Redemption or The Dark Knight. It is essentially the batman of chocolate bars.

Penguins are great because with just a little effort you can split the biscuit and the soft, chocolate cover away from each other then eat it slowly and sweetly like Charlie Bucket nibbling at his only Wonka bar of the year. They also have great jokes on the back and the day I stop laughing at them is the day you should kill me because I’m already dead.

This is the King of all lunchbox chocolate bars. There is SO much chocolate on these unassuming bars! You think you reached the biscuit but no! There’s way more chocolate than you ever could have imagined! It also comes in both orange and mint flavour so you know…yum.

The Phil Mitchell of chocolate bars doesn't mess about. It's good, solid, strong chocolate. Eat it or don't eat it. Do what you want. Yorkie couldn't care less.

The Dairy Milk is for a person who wants a simple life with no complications or drama, and it suits perfect. You know exactly what you’re getting with a Dairy Milk bar, and that is simple deliciousness. Especially when you accompany it with a cup of tea. Oof.

Everyone loves Malteasers, and that’s because they are a chocolate for everything. They are a cinema, theatre, Netflix night chocolate, are devilishly moreish and really fun to eat, especially when you suck them with a straw and so on and so forth. We are the children of the Malteaser and we love it.

Who thought something with so much wafer biscuit could be so delicious? But it is! Kit Kat's are like an old friend, you know exactly what to expect from them and they don't let you down. They also have a REALLY satisfying snap when you split them in half.

How can you dislike something that should always be associated with birthdays, Christmas and Valentine's Day? Toblerone is the most romantic chocolate and also the most extravagant. Seriously, have you seen those GIANT bars of Toblerones at airports? They are amazing.

There's a reason why it's easy to polish off six Milky Way bars in one sitting. They are not too overwhelmingly chocolatey, nor are they especially stodgy. They are small, they are cheap and they are freaking delicious.

The crunchy almond butter bar that simply does not quit. Daim bars are like that enchanted Turkish Delight Edmund eats in The Lion, The Witch and The Wardrobe. Once you've eaten one you can't stop thinking about it. You think about rooms piled with it. You want to eat it on cupcakes and in milkshakes. This is what makes airport shops so amazing, because those Daim bars are EVERYWHERE.

If you really want a chocolate hit, THIS is the perfect fix. It's overwhelmingly chocolate-y with an extra helping of nougat, and is really aimed at chocolate fiends because if you're just a casual chocolate consumer you probably won't be able hack it.

As every man and woman knows, Galaxy is the sexiest chocolate and you can’t help but feel like the Galaxy advert when you titillating eat it cube by cube, probably watching yourself in the mirror as you do it. Galaxy is the Shakira of the chocolate world and it makes us all feel better about yourself. If you're eating Galaxy on the street, that street becomes a catwalk. If you're eating it while ugly sobbing after a breakup, you are suddenly Britney Spears in the Lucky music video, glamorous in your mascara-smudged chocolate-smeared misery. Galaxy is the perfect chocolate for every occasion, and I will rank it top EVERY time. Thank you for your service Galaxy.

Did we get the order right? What's your favourite? Tweet us @sofeminineUK!

10 Hot Chocolate Hacks You HAVE To Try

Scientists Invent Chocolate So Healthy It Can Be Used As Medicine