A weak and ill Andy begs Phelan to take him to a doctor but is terrified when Phelan reveals he has already dug his grave. Meanwhile Nicola starts to prick Phelan’s conscience when she talks about her mother and father. When Eileen turns up at the house Phelan is renovating he has some explaining to do about the house and about why he went to the med centre for antibiotics. At the builder’s yard, Nicola spots some photos of Andy. Phelan quickly covers, making out he must have picked up somebody else’s photos by mistake. Will Nicola buy this?

Robert implores Michelle not to attend his hearing as there’s a strong chance he might not be coming home. Will comforts an upset Michelle. Will invites Maria to meet him for lunch at the bistro and when nobody’s looking, plants drugs in the first aid box. Taking out his phone, he then tips off the police. Kate and Daniel stall the police officers whilst Michelle tries to dispose of the drugs. Will watches with baited breath. Convinced Rich planted the drugs Michelle heads to his house intent on revenge.

Rana and Kate go on a girls’ night out but when Kate attracts the interest of a girl called Imogen, Rana feels surplus to requirements and loses her temper. When Kate spends the night with Imogen Rana is not impressed.

When Kirk wins a competition to be Weatherfield County’s new Buzzy Bee mascot a reporter jokingly suggests he run for mayor against Sally. Tracy is horrified to discover Amy has let Summer colour her hair. Gemma and Rosie grow increasingly concerned about Rita’s behaviour and forgetfulness. Hurt by Seb’s rejection Faye makes plans for them to get back together and run away from Weatherfield. Toyah sets up a meeting with a surrogacy agency. 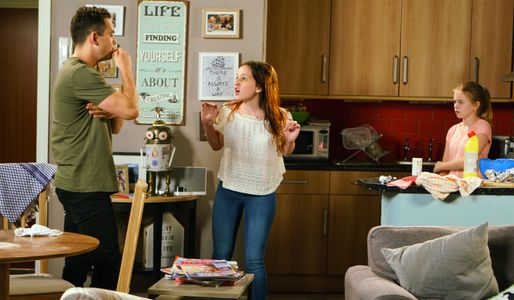