Realising Gary never came home last night, Anna’s worried. Convinced he’s in trouble, Anna heads to the factory and confronts Alya. Hanging her head in shame, Alya admits that the wedding is off as she slept with Jason behind Gary’s back. At the builder’s yard Zeedan lies in wait for Jason, clearly angry. Zeedan suggests it’s Jason’s fault that Alya had sex with him but when Jason’s quick to point out it was what Alya wanted, Zeedan sees red and punches Jason.

Kylie remains cold towards David. David assures her he’s not proud of what they did to Callum but they had no choice. When Eva suggests to Kylie they go and get sloshed (upset that Jason slept with Alya), David’s worried Kylie might spill the beans to her best friend.

When Ken offers to help Emily sell her charity poppies, Nessa grabs the chance to spend some time with Ken and offers up her services too. After a successful afternoon selling poppies, Nessa drags Ken for a celebratory drink. Cathy’s disapproving.

When Norris mocks Mary’s interest in the supernatural, Mary’s defensive and reckons he’s jealous of her friendship with Brendan. When Brendan calls in the Kabin and invites Mary for a drink, Mary’s thrilled whilst Norris is peeved. Having discovered a leak in the ladies’ loos, Liz is forced to ask for Tony’s help.

In a rage, Zeedan threatens to push Jason off the balcony. Spotting the commotion, Alya and Eileen rush to Jason’s rescue. Alya assures Zeedan that she instigated sex with Jason and it wasn’t his fault. Zeedan lets go of Jason, and turns his anger on Ayla, disgusted by her behaviour. Yasmeen suggests they all talk about what’s happened but Sharif can’t bear to look at his granddaughter. Alya feels terrible. Zeedan finds Alya in the bistro staring into an alcoholic cocktail. He points out that getting drunk isn’t going to help but will he be able to offer her the support she so desperately needs?

Over cocktails, Eva presses Kylie wanting to know why she’s fallen out with David. As they get progressively more drunk will Kylie spill the beans?

In the bistro, Ken regales Nessa with stories of his teaching days. Nessa’s clearly smitten. Cathy confides in Audrey how she’s worried about Nessa getting her claws into Ken as she’s a terrible track record with men.

Brendan joins Mary in the pub where he has her enthralled with tales of the supernatural. When Brendan’s phone beeps, he says it’s a message from his mother and he has to go. Mary’s disappointed but they agree they’ll meet again. Steve’s furious to find Tony mending the plumbing in the ladies’ loos and throws him out telling Liz that he’ll finish the job. 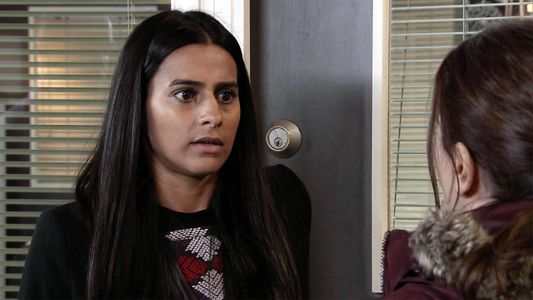