Coronation Street 03/10 – The past comes back to haunt Kylie

Kylie tells David she is poorly so can’t go to work. Once he has gone she heads for the bus where Eva finds her and offers to accompany her to her old neighbourhood. At the pub she finds Gemma but there is no sign of Max’s dad Callum - until she is about to leave...

Tim is thrilled with the flyers he has had made for his window cleaning business but they make more of an impact than he had expected - thanks to an unfortunate typing error. When Maddie catches people sniggering over them she makes it her mission to try and get all the flyers off the streets.

Mary is furious to find Norris and Rita gossiping about a possible burgeoning romance between Julie and Dev.

Liz confides in Eileen that Jim is using his hold over Peter to blackmail her into visiting him in prison.

Eva is shocked to see how Kylie is with Callum and his mates - laughing and joking rather than speaking to him about Max which was supposed to be the reason for the visit. Callum is a good looking charmer, dangerous and sexy, and as they are leaving he writes his number on Kylie’s arm and tells her to keep in touch. But when Kylie returns home she finds Max and David have prepared her a special meal and she feels guilty about seeing Callum.

Maddie and Tim race around Weatherfield collecting all the dodgy leaflets - but it’s too late Sally has already taken a call from someone wanting Tim’s ‘services’ and is furious with him. Tim’s still adamant he doesn’t want Maddie telling Sally about his reading difficulties

Eileen thinks Liz should defy Jim and tell Deirdre about his blackmail. But when Deirdre thanks Liz for her help over Peter Liz can’t bring herself to come clean to Deirdre, Tony or Steve.

Dev finds himself making the situation between Mary and Julie worse with his hapless attempts at being kind to both women - but does he really have feelings for Julie? 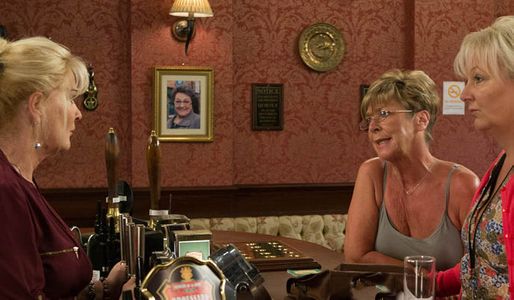 Coronation Street 01/10 – Kylie confronts her past head on