At the salon Nessa styles Mary’s hair, while wittering on about Ken, much to Audrey’s annoyance. Nessa calls in the café and quizzes Roy about Ken’s likes and dislikes. Cathy worries that poor Ken doesn’t stand a chance. Meanwhile Audrey confides in Rita that she’s grown very fond of Ken but in so doing feels disloyal to Deirdre. Rita encourages her to seize the day. Will Audrey tell Ken how she feels about him?

Gail arrives back from Milan with Bethany and explains how Sarah changed her mind at the last minute and decided to stay. When Marion calls at No.8 with a box of Max’s toys, Gail sympathises over the disappearance of Callum. But how will David and Kylie react when they find Marion enjoying a cup of tea with Gail, asking about access to Max?

All dolled up for her date with Tony, Liz lies to Michelle telling her she’s off out with Erica who needs cheering up. When Erica calls in the pub, Liz quickly hustles her out of the door, Erica’s bemused. Liz admits she’s got a date with Tony. Erica reckons she’s playing with fire.

Dev’s impressed to hear that Kevin’s expanding his business and has bought one of the arches. Tyrone resolves to give the girls the best Christmas ever. When Erica moans to Dev about how demanding her mother can be, Dev suggests they meet for a drink later. Will Erica accept?

Audrey calls at No.1 intent on revealing her true feelings to Ken but she’s shocked to find Nessa there enjoying a glass of wine. Audrey leaves, embarrassed. In the Rovers, Audrey’s upset as she confides in Rita how Nessa appears to have got her claws into Ken. Will Rita be able to persuade Audrey to open up to Ken or with Ken enjoying dinner with Nessa, is Audrey too late?

Gail lays down the law to David, telling him it’s only fair that Marion should spend time with her grandson. But when Marion approaches Max, it’s clear he’s scared of her. Upset Marion realises it’s best if she says goodbye to Max as it’s obvious he’s frightened because she’s Callum’s Mum. David’s relieved whilst Gail and Kylie are heartbroken for her. As Marion says a tearful farewell to Max, Kylie feels terrible whilst David’s glad to see the back of her. Appalled at David’s callous attitude towards Marion, Kylie tells him to stay away from her.

Liz and Tony arrive back from the gig having had a wonderful evening. They share a nightcap in the builder’s yard and Tony tentatively kisses her. Liz heads home leaving Tony hopeful that they might have a future. Meanwhile when Sean lets slip he saw Erica and Dev in the bistro, will Liz be forced to tell Michelle and Steve of her date with Tony?

Over a drink, Erica tells Dev that her brother is moving in to look after their mother and so with more time on her hands she needs to find a job. When Dev offers her work in the shop, will Erica accept? 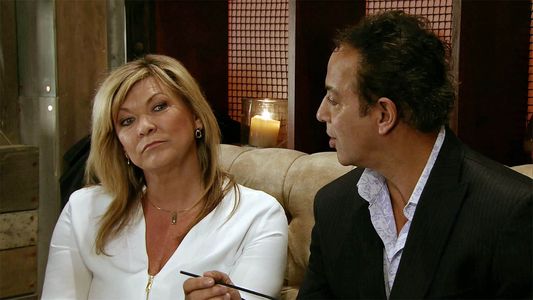