Whilst Billy frets about Summer, wishing there was something they could do, Todd secretly forms a plan. Handing Adam his signed contract, Todd suggests he should take on Summer’s case. Pointing out she’s only a child, Adam’s only too happy to pass the buck. When Summer calls at the solicitors, she’s put out to find her meeting is with Todd, but he soon puts her at her ease. Summer unburdens herself to Todd and talks at length about her Dad. Is Todd making a breakthrough with Summer?
​

When Dev invites Kevin and Anna for dinner, Anna’s delighted whilst Kevin and Erica exchange surreptitious looks. Erica returns from a shopping spree and shows Anna the glamorous dress she’s bought for their evening together. When Anna gets cold feet and refuses to go for dinner at Dev and Erica’s, Kevin’s annoyed and sets off by himself.
​

When Matthew Singh calls in the factory with flowers for Jenny, Johnny does his best to mask his jealousy. In the Rovers, Johnny laments to Liz how much he misses Jenny. Liz invites him through to the back. Misreading the situation, Gemma watches aghast. Gemma advises Jenny to get stuck in with Matthew Singh as Johnny’s been cheating on her with Liz. Jenny’s gutted. Jenny marches into the Rovers back room and confronts Johnny and Liz. Will Johnny come clean?
​

Bethany helps Mary in the flower shop and tells her how she’s dreading Nathan’s court case. Mary assures her she’s done the right thing. A police officer calls at No.8 and breaks the news to Sarah that they haven’t enough evidence to press charges against Nathan. Bethany’s distraught and blames herself. On the pretext of buying a wedding dress, Eva and Leanne persuade Aidan to hand over his credit card. Eva and Leanne return from their shopping trip with a surprise purchase for Aidan.
​

Jenny heads out of the Rovers hurt and confused. Liz implores Johnny to go after Jenny and tell her how much he loves her. Having returned to the bistro, Jenny apologises to Matthew for messing him around. Johnny arrives and spotting Matthew with Jenny, flies into a jealous rage. Jenny’s horrified will she forgive Johnny?
​

Mary calls at No.8 and Sarah explains how the CPS have had to drop Nathan’s case. Consumed with self loathing, Bethany tells them it’s all her own fault for being so gullible and stupid. Mary and Sarah wish they could do something to help her. Desperate to help her daughter, Sarah confides in Mary that she’s going to have a word with Neil, the friendly police officer who helped Bethany in the past!

Dev heads off to collect the kids leaving Erica to entertain Kevin. Throwing Kevin a meaningful look, Erica tells Dev to take as long as he likes will they be able to resist each other? At No.13, Anna confides in Rosie that the accident knocked her confidence for six and next to Erica she feels plain and dowdy. In an effort to cheer Anna up, Rosie puts together a mood board of fashion ideas for her. Anna’s touched by her kindness and asserts that she’s going to make things up to Kevin.
​

Aidan apologises to Eva for overreacting over her purchase and offers to set up a joint credit card for her. Eva and Leanne celebrate, determined to bleed him dry. Tracy’s scathing about Adam’s new office and wonders which idiot agreed to act as guarantor. When Todd suggests to Billy it’s time they looked for a place of their own, he agrees, pleasantly surprised. Tracy shows Todd and Billy round the flower shop flat. 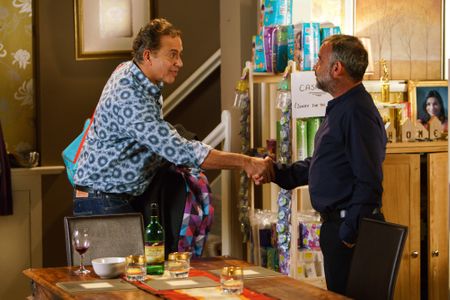 Coronation Street 23/07 - Michael has a choice to make