Michelle’s not returned home, worried sick Robert leaves a message on her phone begging her to get in touch and let him know she’s okay. Robert’s convinced Rich is behind it. The police break the news to Robert that Rich has an alibi meaning he couldn’t have abducted Michelle.

Hungover Leanne remembers with horror that Steve proposed to her and they need to talk. When Steve admits he likes Leanne and reckons they could make it work, Liz encourages him to buy a ring and propose properly. Amy’s shocked to overhear this.

When Luke admits he tried it on with Alya but she knocked him back, Kate’s unimpressed, reminding him flat mates are out of bounds. But Alya confesses to Rana that she’s got the hots for Luke, Rana urges her to ask him out. Rosie laments to Norris and Tim that window cleaning isn’t for her and she particularly hates the overalls. Todd and Adam throw a party to mark the opening of their new solicitor's’ office. Rosie begs them to consider her for the role of PA.

Robert grabs Rich outside his house and gives him a severe beating, telling him if he has gone near Michelle again, he’ll finish the job off. The police call at Victoria Court and arrest Robert on suspicion of ABH.

Gary makes a start on his new job but fails to stack the bricks properly. The scaffolding collapses and Gary is buried under a pile of bricks. Sarah arrives at the hospital and is relieved to find Gary in one piece. When Gary’s employer, Don, assures him the job is still his but he’ll need copies of his insurance documents to claim for the smashed conservatory, Gary masks his discomfort.

Before Leanne can stop her, Amy texts Simon informing him that Leanne and Steve are going to get married. Outside the Rovers, Steve approaches, Leanne’s horrified to see that Oliver is wearing a baby grow emblazoned with the words “Will you marry my Daddy?” Amy, Simon, Peter, Toyah, Eva and Tracy watch as Steve gets down on one knee and lists all the reasons their marriage could work. How will Leanne respond?

Rosie begs Adam and Todd to reconsider and give her an an interview for the PA job. Convinced she’d be perfect for the PA role, Gail tells Todd he’ll have her CV on his desk first thing in the morning. Alya lures Luke back to the flat on the pretence that the food processor is broken. When Luke spots the screwdriver on the side, he sees straight through her ruse but has he plan worked? 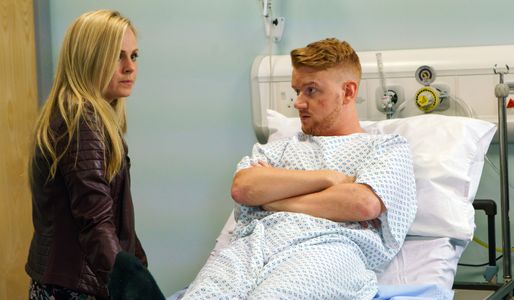