Dev excitedly reopens the shop. Finding it hard to share his enthusiasm, Erica reluctantly agrees to hand out some promotional fliers. As Liz packs up her belongings, ready for their move, Erica calls round, the weight of the world clearly on her shoulders. In the garage, Kevin confides in Rosie how Anna recoils whenever he goes near her and he fears their relationship might be over. When Erica confides in Liz that she and Dev have lost their spark, Liz advises her to focus on what she wants from life and go and get it. Erica reaches a decision. Taking the bull by the horns, Erica calls in the garage and revealing that she’s booked a hotel room, suggests Kevin joins her for an afternoon of fun. What will he say?

Aidan’s furious to find out from the factory girls that Johnny and Jenny are back together. Aidan confronts Jenny, angry that he’s the last to know that their wedding is back on.

Sarah calls at the police station and begs Neil to have a word with Bethany and make her see that she’s not to blame. Sarah arrives home with Neil in tow and explains to Bethany that he’s kindly agreed to have a chat with her. Bethany does her best to mask her fear.

When Sean calls in the Kabin with a letter addressed to Mr & Mrs Cole and in Norris’s handwriting, Rita and Mary are intrigued. Concerned that without the pub to run, Liz is going to be at a loose end, Steve signs her up for a raft of courses at the community centre. Yasmeen’s delighted.
​

Handing him the hotel address, Erica heads off leaving Kevin conflicted. In a bid to spoil her, Dev tells Erica he’s booked an afternoon of luxury for them both followed by dinner at her favourite restaurant. Flustered, Erica tells him she can’t make it as she’s meeting an old friend. Dev’s disappointed. Having changed into his best shirt, Kevin sets off for his assignation with Erica. Erica sips champagne in the hotel bar as she eagerly awaits Kevin’s arrival.
​

Neil threatens Bethany and tells her to lie to Sarah and pretend she made the whole thing up; that she enjoyed the parties and the sex. Bethany’s appalled. Having clocked Neil leaving No.8, Craig spots Bethany through the window, clearly upset. Craig calls to see Bethany and quizzes her about Neil’s visit. Will she come clean? Johnny calls on Aidan and Eva. Hugging Aidan he tells him that he’ll be a better Dad than he ever was. Eva listens guiltily.
​

​When Steve tells Liz that he’s booked her on various courses, she’s touched but reveals that she’s already secured herself a new job as receptionist at the medical centre. Mary confronts Norris with the letter. 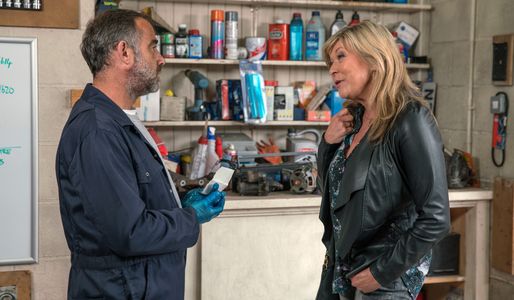 Pascale Day
…
Coronation Street
From hair ideas to outifts, look no further for your daily inspiration