Coronation Street 11/12 - Rob sets the cat amongst the pigeons

When Rob phones Tracy from prison, Tracy agrees to visit again but asks him to send the visiting order to the shop so Ken doesn’t find out. Johnny later visits Rob in prison. As Rob drops a bombshell on Johnny he’s left reeling from Rob’s shock revelation.

Sarah’s clearly in turmoil and Kylie’s suspicious. Kylie rifles through Sarah’s handbag and finds the name of the abortion clinic. Confronting Sarah, Kylie asks her if she’s pregnant. Will Sarah reveal the truth?

Nessa enjoys telling Audrey how she’ll be attending Carla and Nick’s engagement party as Ken’s plus one. Audrey paints on a smile while offering to do her hair. However Nessa’s appalled with her new hairdo, has Audrey made her look a fright on purpose?

In the Kabin, Rita overhears Brendan on the phone to his wife and realises with horror that he’s married. Rita breaks the news to Mary that Brendan is married but she’s taken aback to realise Mary already knew. Rita’s troubled as Brendan calls for Mary, flirting outrageously. Secretly hoping to impress Liz, Johnny splashes out on a new shirt for the engagement party.

As Rob makes it clear to Johnny he knows all about his past, Johnny pales. Rob threatens to blackmail Johnny telling him he wants £10k or he’ll spill the beans to Carla, Aidan and Kate. Johnny leaves, rattled. As the engagement party gets underway at the bistro, Carla grabs a word with Johnny, desperate to know what Rob wanted. Johnny covers telling her Rob simply wanted to know what was going on with the factory. Meanwhile Carla asks Roy if he’ll give her away at her wedding and Roy assures her it would be an honour.

As Ken and Nessa prepare to leave for the party, Amy clocks Nessa’s ridiculous hairdo and outfit and bursts out laughing. Upset by Amy’s comments and only too aware that Audrey sabotaged her hair on purpose, Nessa refuses to attend the party. Ken’s disappointed but when Nessa offers to stay the night again will Ken be appeased?

Under pressure Sarah admits to Kylie that she’s carrying Callum’s baby but implores her to keep it a secret. Will Kylie agree?

As Brendan and Mary mull over the wonderful day they’ve had at the convention he moves in for a kiss, will Mary respond? Back in the pub Rita quietly warns Mary that Brendan will never leave his wife and will only cause her heartache but is Mary prepared to listen? At the party, Eva flirts with Aidan but he plays hard to get. Liz senses there’s something bothering Johnny. 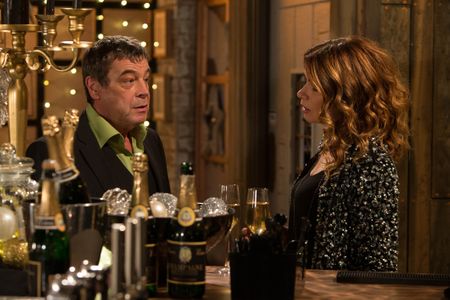