Doing her best to contain her excitement, Eva tells Aidan to meet her in the bistro later, confiding in Leanne how she plans to propose to him. With the help of Leanne, Jenny, Michelle and Kate, Eva puts the finishing touches to her Mexican themed engagement party. Meanwhile with Audrey minding Liam, a glam Maria suggests Aidan should buy her a drink in the pub. While a nervous Eva waits for Aidan, Maria follows Aidan into the men’s loos and kisses him passionately. Fed up of waiting Eva heads for the Rovers, what will she find?
​

Having arrived back from his appointment with the neurologist, Johnny’s in a state of shock but covers when Kate approaches.

Having received a text from Shona telling them that she’s left Weatherfield for a fresh start, Eileen and Billy worry for her safety. Calling in the salon they beg David to try calling her. Losing his temper David hurls his mobile through a mirror. David opens up to Gail and tells her how Shona was the first person to make him feel happy again since Kylie’s death. Covering her guilt, Gail holds her emotional son. Cathy’s chuffed when Brian invites her out on a proper date. Leanne’s put out to discover Nick’s intends to sell his share of the bistro. Seb’s key worker, Nicola, approaches Phelan, explaining that Seb is due out soon and wondering if he could offer him an apprenticeship.

With all eyes on Aidan he sweeps Eva into his arms, accepting her proposal. Everyone cheers whilst Maria’s devastated. Jenny leads the engagement party back across the street. Making his excuses, Aidan slips out to see Maria, explaining that he loves both she and Eva, he implores her not to end their affair. When Maria walks into the bistro Aidan’s on pins, what has she come to say?

When Kate quizzes Johnny about his results he lies, telling her he’s got an infection and it’s nothing to worry about. Kate’s relieved but when Jenny outlines her plans for an action packed honeymoon, a dismayed Johnny reaches a decision. Angry David shouts across the street to Eileen and Billy, telling them that Shona is the mother of Kylie’s murderer. Billy’s shocked.

​Nicola explains the details of the apprenticeship scheme to Phelan. Handing him a business card she heads out. Phelan’s thoughtful, what’s in this for him? 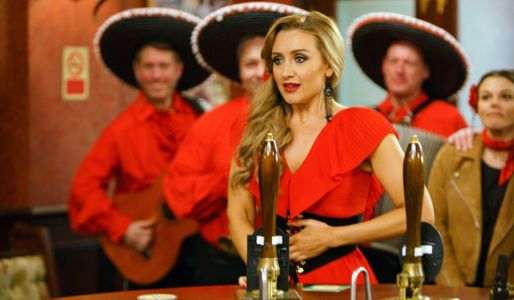