Aware that leaving her beloved pub will be a huge wrench, Sean presents Liz with a lucky charm to take with her to her new job. Liz is saddened but touched. Peter, Toyah and Steve watch as Liz finally signs over her half of the pub. Sean puts a comforting arm round her, knowing how much she’s hurting. Liz starts work at the medical centre and soon finds herself clashing with her new boss, Moira.

Having done some digging, Craig confronts Neil wanting to know why there’s no record of his home visits to Bethany. Neil angrily orders Craig to mind his own business. Craig calls at No.8 and again questions Bethany about Neil. Bethany breaks down and admits Nathan forced her to have sex with Neil against her will. Determined to see justice done, Craig resolves to report Neil for his crimes. But Bethany begs him not to, revealing how Neil threatened to hurt her family if she blabbed. Craig holds Bethany as the tears flow. Will he keep her secret for her?

Anna reaches a decision and telling Kevin how much she loves him, assures him she wants to remain a family and start afresh. Kevin hugs her gratefully.Kevin apologises to Erica for letting her down explaining how he loves Anna and it wouldn’t have been fair on Dev. Erica masks her disappointment.

As Mary makes to phone the Mr & Mrs competition organisers and explain there’s been a mistake, Rita stops her and reveals how the prize is a trip to Cape Town and Norris thought she’d like to visit her son. How will Mary react? When Gail suggests they should do something to mark the anniversary of Kylie’s death, David struggles to contain his emotions. 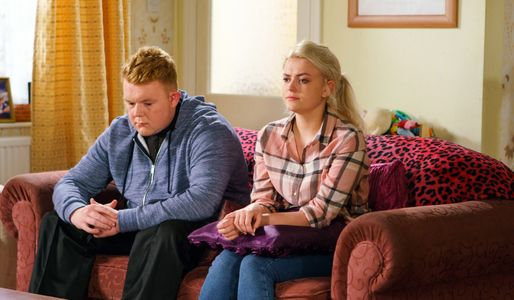 Coronation Street 09/07 - Bethany gets in over her head

Coronation Street 21/07 - The End Is In Sight For Bethany