In a bid to smooth things over between her and Simon, Leanne suggests he invites his friends for lunch at the Bistro. Leanne’s pleased when Simon appears to be enjoying himself but doesn’t notice when Simon steals a bottle of vodka from behind the bar. As he and his friends become increasingly drunk, Leanne is horrified to discover the empty bottle under the table. Back at home an angry Leanne hasn’t the patience for Simon’s excuses, but is Simon able to control his fury in his drunken stupor?

Having spent the night with Robert, a loved up Tracy is elated and Ken is pleased to see her happy again. But when Ken mentions that Deirdre has left her £80K life insurance policy in trust of Simon and Amy, Tracy is put out. And when she gets back to Barlow’s Buys, she’s even more deflated to find that Tony has dumped a load of stock in the shop before doing a runner...

A confused Lloyd tells Steve that his most valuable record is missing from his collection. When he later tells Andrea that he’s confused about the record’s whereabouts and that it must have been stolen, Andrea tells him he must have misfiled it away somewhere. But does Andrea know more than she’s letting on?

Steve has a heavy heart as he goes to deliver Rover to his rightful owner. Maria is offended when Steph tells her that Luke thinks she’s going off him. 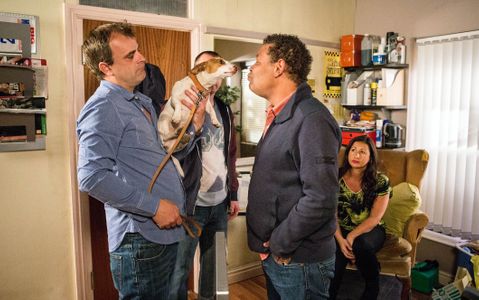