Coronation Street 12/09 – Will Kylie confess to her new low?

Having been up all night pouring over paperwork, Kylie’s exhausted before she even starts her day at the salon. Struggling to concentrate she heads out to get painkillers but home alone she picks up Max’s pills and swallows two. When she returns to the salon looking much more together David’s pleased. In turmoil Kylie confides in Eva that she’s a terrible mother. But will she confess the new depths she’s sunk to?

Lloyd’s put out to see Neil has placed an announcement in the Gazette celebrating his and Andrea’s wedding anniversary. When Neil then arrives at the bistro and parks himself at the table next to Lloyd and Andrea, she’s at her wits end.

Jason remains frosty towards Tony. Gutted Tony pours his out to Eileen, explaining he only wants the best for Jason. Will Eileen plead his case with Jason?
​
Alya tells Julie it’s obvious Dev fancies her. When Amy accidentally cuts her hand she sees the opportunity for some attention and lies that Eccles bit her. 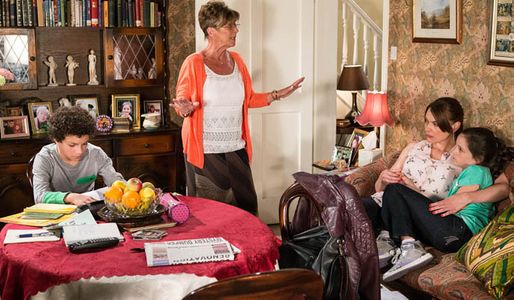