Tony is late for Todd’s birthday meal to Eileen’s annoyance. Sean gives Todd a shirt and Todd strips to put it on, winking at Marcus. He makes it clear he fancies Marcus – will Marcus be able to resist?

Tyrone and Kirk bring Hayley a van load of strawberries. The nurse brings Hayley a wheelchair, but she doesn’t want it in her sight and asks Roy to get rid of it.

Eileen spots Marcus and Todd and is furious, accusing Todd of trying to wreck Marcus and Maria’s relationship. Todd finally tells Sean he doesn’t fancy him, but how will Sean take it?

Mary and others begin turning the strawberries into jam for an ill Hayley, who is overwhelmed to see them busy making jam for her at the café.

Stella compliments a pleased Dev on his physique, who immediately goes to Kal to restart his training sessions.
​
Elsewhere, Anna and Izzy are persuaded by Owen to go in with Phelan’s project. 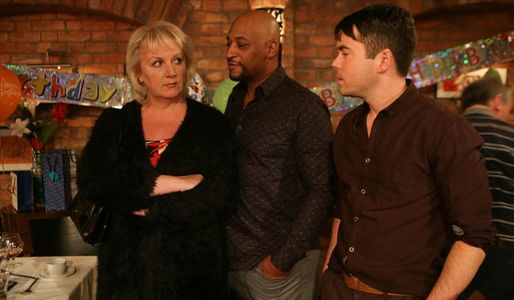