Coronation Street 13/09 - Jason has one thing on his mind: revenge

Jason gets Callum’s address from David and heads out for revenge. Letting himself into Callum’s empty flat, Jason contemplates trashing the place but he’s disturbed by the sound of approaching voices and hides in Max’s bedroom. From his hiding place, Jason listens as two thugs threaten Callum and demand money. Jason’s ringing mobile gives him away and he’s hauled out to face Callum. Having heard that Jason’s gone looking for revenge Tony suddenly bursts in. As Jason throws a punch at Callum who will have the upper hand? Meanwhile with the threats from Denton ringing in his ears, Callum calls at No.8, warning Kylie and David that until they cough up his
money, nobody in their family is safe.

Cathy’s nephew Alex visits her at the café. Charmed by Alex, Roy invites him to stay the night on his sofa. But Roy and Cathy are embarrassed when Alex assumes they are an item. Will Cathy admit that she’d like to be more than just a friend to Roy?

Steve’s gobsmacked when he overhears Andrea discussing her pregnancy with Michael in the cab office. Andrea pleads with him not to tell Lloyd. Steve’s left stewing as he and Michelle make up a foursome with Liz and Lloyd for lunch. Michelle orders him to buck up but is stunned when he tells her Andrea’s pregnant. Will they be able to keep Andrea’s secret or will Steve break the news to Lloyd that he’s going to be a dad?

Maria’s worried when Luke reveals he’s almost finished work on his stock car and intends to race it tomorrow. Joining forces with Steph, they let themselves into the garage, intending to damage the vehicle so Luke can’t race. Will their plan work? Michael reluctantly celebrates his 60th birthday with the Grimshaws. But how will he react when Eileen presents him with a revolting Hawaiian shirt? 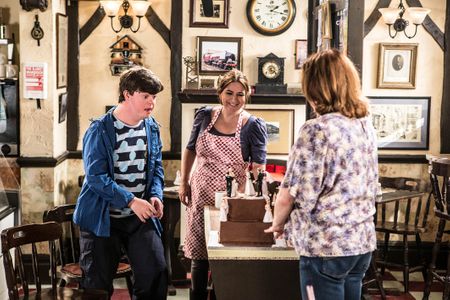