Tracy’s horrified to discover Tony’s emptied their joint business account and angrily confronts him over the missing money. Meanwhile when Amy reveals that Tony and Grandma Liz are back together, Tracy drags Amy over to Michelle, making her reveal how she saw Liz and Tony snogging. As Tony proudly reveals to Liz how he emptied Tracy’s business account, the couple kiss, just as Michelle and Tracy burst in, catching them in the act. Michelle listens in disbelief as Liz explains how Tony’s changed and she’s decided to give him another chance. Liz then tells Tony that if their relationship is to work, he has to win her family round and the only way to do that is to give Steve’s share of the Rovers back. Will Tony agree?

In an effort to cheer him up, Eva offers to take Simon shopping. Simon reveals how lonely he was during his time in Portsmouth as Peter has a new girlfriend and hardly spent any time with him. Eva reports back to Leanne but when Leanne quizzes Simon about his trip he’s defensive and accuses Leanne of sending him away because she didn’t want him. How will Simon respond when Leanne explains that she sent him away because he kept attacking her!

Carla introduces Johnny to Sally. Johnny takes an instant dislike to Sally’s voice and suggests to Carla they demote her to the factory floor. Johnny takes Sally to one side and tells her she’s being demoted back to a machinist. Sally’s outraged but when Johnny explains that she’s the best machinist in the land and he’d like her to be supervisor, will Sally accept?

Chesney admits to Sinead that he’s promised Tyrone that they’ll provide the Lapland
grotto in their house. How will Sinead react? 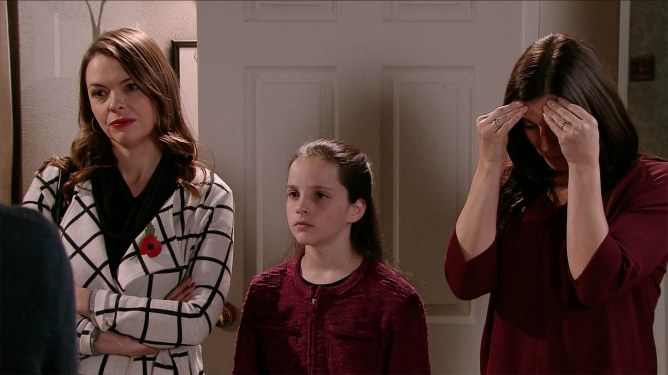