In a desperate bid to gather evidence against Nathan, Sarah and Gary confront Mel at the tanning salon and beg her to tell the police all she knows. Hoping to find some of Nathan’s other victims, Sarah and Gary call at the drop-in centre where Yasmeen and Rana are working as volunteers. As a despondent Sarah and Gary make to leave, they’re distracted by two girls arguing. Sarah’s taken aback to see that one of the girls is Shona.
​

Bethany puts pressure on Craig and makes him promise not to report Neil as it’ll only make matters worse. Craig’s conflicted. Craig calls at the police station and after telling his Chief Inspector that he’d like to quit the force, heads out shooting daggers at Neil.
​

Moira heads out to a meeting leaving Liz in charge of reception. As the queue of patients buckles and the phone continually rings, Liz struggles to keep her temper. How will battleaxe Moira react?
​

​Gary’s taken aback when his old army friend Joe arrives on the street. Erica calls in the shop and turning the sign to ‘closed’ tells Dev they need to talk. Determined to make Aidan pay, Eva announces she’s booked some house viewings as it would be nice to have a garden for the baby. As David, Gail and Audrey set off to visit Kylie’s grave, Max reads out a poem he’s written for his Mum. Audrey listens, choked.
​

Joe tells Gary he’s running his own private security firm in the Ukraine, the money is fantastic and he should consider coming to work for him. How will Gary react?
​

Covering his shock, Neil tells Craig a pack of lies. Craig doesn’t know what to believe. While David, Bethany, Gail, Audrey, Gemma and Max mark the anniversary of Kylie’s death with a picnic in the garden, David the dog escapes. As David scoops up the dog, he’s horrified to see Billy helping Shona into No.11. David rails at Billy ordering him to keep Shona well away from him. David returns home clearly furious and announces the party’s over. When Sarah explains how she’s doing everything she can to nail Nathan and Shona can help them, Bethany’s furious wishing she’d just let it drop.
​

Fearing that Erica is about to dump him, Dev suggests she should have more space and time to spend with her mates. Erica can only smile weakly. Determined to put some distance between she and Dev, Erica approaches Robert for a job in the bistro.
​

​When Aidan reveals he’s buying the kebab shop flat, Eva goes ballistic, pointing out she wanted a house with a garden in Didsbury. 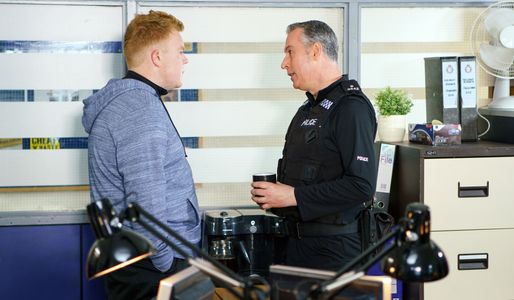