David accompanies Max on his school outing to keep him safe from Callum. Kylie tells Bethany about Callum’s threat. Seeing her anguish, Bethany’s guilt-ridden but, spotting Callum lurking nearby, insists she won’t withdraw her alibi statement. Callum catches up with Kylie and demands she does whatever it takes to get his money. Goaded, Kylie slaps his face. An angry Callum promises to make Kylie pay. As he hangs around in the pub, behaving obnoxiously to everyone, what has Callum got in store for the Platts?

Steve warns Lloyd that Andrea’s using his unborn child to trick Lloyd into taking her back. Not wanting to hurt Liz, Lloyd’s faced with an impossible dilemma. When Liz reveals she’s booked a holiday as a surprise for Lloyd, Steve’s pleased, believing Lloyd needs to get away from Andrea’s mind games. But when Dev reminds Lloyd that a baby is a blessing, Lloyd realises he needs to speak to Andrea. Andrea makes a stirring speech, admitting to Lloyd that she wants them to reunite and raise their child together. Will Lloyd be moved by her speech?

Roy looks forward to Alex’s next visit as he heads home. Encouraged by Anna, Cathy plans to open up to Roy about her feelings, will she hold her nerve?

Steph’s outraged that Maria’s agreed to watch the racing with Luke. Maria invites her and Andy to join them. Will Steph agree? Tony informs Gail he’s found a manhole under her garage floor, which ought to be dug out and refilled – at extra cost. Gail’s heart sinks.

Hearing Audrey’s screams from inside the salon, a passing Ken bangs on the locked door. As two thugs run off down the street, Ken finds a shaken Audrey inside the salon, which has been trashed. Kylie and David are shocked to find the police at the salon, realising Audrey’s been targeted by Callum. As Sarah throws an obnoxious Callum out of the Rovers, Kylie accuses him of causing bother in the pub to secure his alibi for the time of the salon incident. But can they prove Callum was behind it? The stress of the day taking its toll on the Platts, Kylie and Sarah blame each other for Callum’s hold over their lives, while Gail comforts a shaken Audrey. Bethany looks on, ashamed of her role in their misery.

Lloyd calls at the pub to see Liz. He’s gobsmacked when she reveals she’s booked them a holiday. Liz’s face falls as Andrea walks in. Lloyd admits to Liz he’s reconciled with Andrea, who’s pregnant. How will Liz react to the news and what will Steve have to say about his friend trifling with his mum’s affections? Meanwhile Andrea informs Lloyd that when they split she accepted the offer of a hotel manager’s job in Jersey, which she will now have to turn down.

Cathy tells Anna she failed to declare her feelings to Roy. Putting it down to fate, she decides to leave well alone. But as Roy chats to Ken, will he reveal his true feelings towards Cathy?

Luke, Maria, Steph and Andy set off for the racetrack. Steph’s uneasy when she learns that Luke’s friend Jamie is joining them. Andy wonders if Steph fancies Jamie but Steph dismisses the idea. Will Luke be able to change Maria’s view of stock car racing? 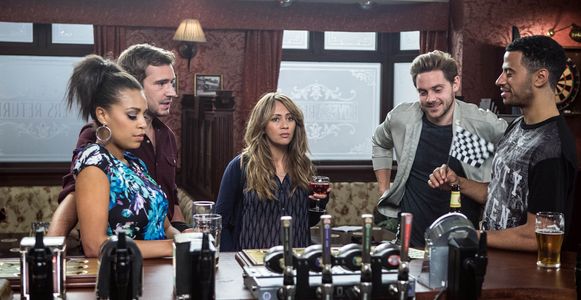