Todd reminds Sarah how devastated she was when she lost baby Billy and implores her to think twice about her abortion. As Sarah heads off for her appointment at the clinic, Todd confides in Kylie that he thinks she’ll regret her decision. Kylie finds Sarah at the abortion clinic and implores her to keep her baby, reminding her that Max is Callum’s son too but she loves him. Kylie tells Sarah that her baby could be the one good thing to come out of the whole sorry mess. As the nurse calls Sarah through, Sarah’s torn.

When Johnny receives a package, Liz, Carla and Kate are intrigued but Johnny snaps at them telling them it’s none of their business. The women are taken aback. Johnny later confesses his dilemma to a stunned a Liz. What has Johnny got up his sleeve?

Eileen admits to Michael she retrieved his Awards invite from the bin and booked them a table at the Bistro. Annoyed at Eileen for going behind his back, Michael tells her she’ll be attending the ceremony on her own.

At the school nativity play, Dev and Mary watch proudly as Aadi and Asha play Joseph and Mary. However David and Kylie are pleased as punch when Max steals the show as the Innkeeper.

Sarah apologises to the nurse and rushes out of the clinic with Kylie. Back at the Platts David’s annoyed with Kylie for doing a runner from the school play. However when Sarah explains that Kylie was looking after her and she’s pregnant with Callum’s baby, David’s poleaxed. As Kylie assures her she’s got their support David’s horrified and a row breaks out. Will Sarah decide to go through with an abortion or can Kylie convince her to keep the baby?

Dee tracks down Michael and presents him with her father’s cufflinks, telling him she’d be flattered if he’d wear them to the awards ceremony. Michael feels terrible. Will he come clean or be forced to put aside his guilt and attend the event?

When Erica and Anna arrive at a wine bar for Singles Night, they’re taken aback to find Kevin there too. As Kevin and Anna compare notes, it’s clear there’s a spark between them. 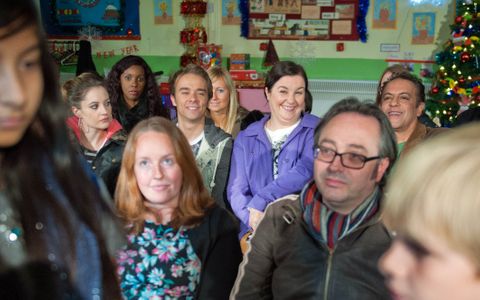