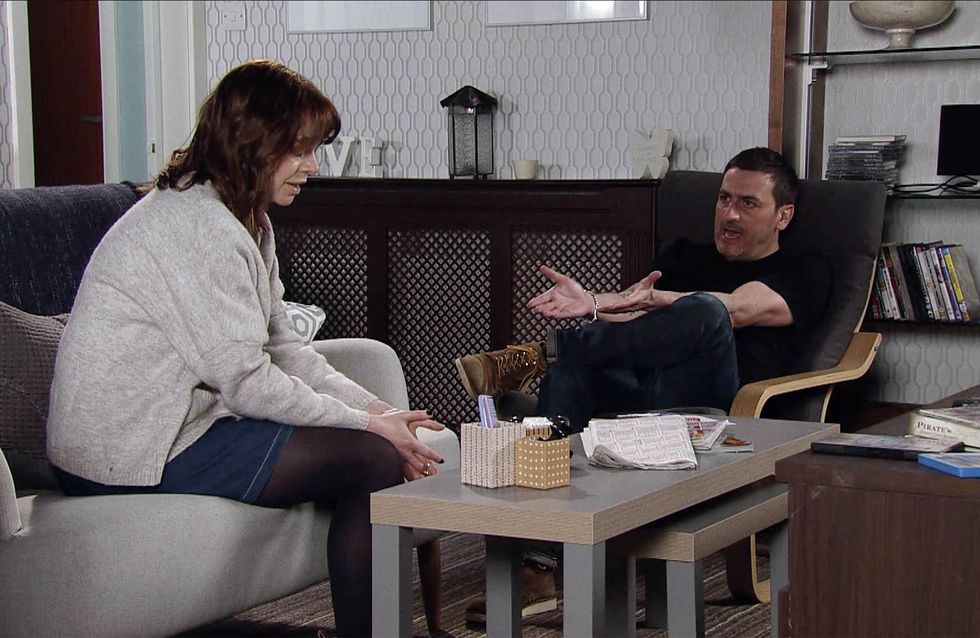 Tracy tells Peter that she has the money to buy the Rovers so as a result he and Toyah will be able to go ahead and buy the Rovers. With their fortunes on the up Peter calls the IVF clinic to make an appointment but is shocked to discover that Toyah went ahead with the implant behind his back. Furious, Peter confronts Toyah. As their row escalates Toyah admits she suspects he’s guilty of attacking both Chloe and Ken. Where does that leave their relationship? And will Toyah tell Peter whether the IVF was a success or not? Meanwhile Peter confides in Leanne. Determined to do what she can for him she calls at Chloe’s house, demanding she drops the assault charge. When Toyah also barges in, Chloe wonder what’s going on.

Faye begs Phelan to take her to visit Seb at the Young Offenders Unit. But as she climbs into his van, Anna clocks her from across the street.

Nick thinks they just organise a naming ceremony for Oliver, Leanne’s not convinced but Nick steams ahead and books it for the next day!

Shona lies to Roy, Eileen and Todd, telling them she’s moving away as she’s got a new job. What’s behind her sudden decision to leave the street? In an attempt to inject some romance back into their relationship, Kevin books a hotel for he and Anna.

Leanne and Toyah play Chloe at her own game and threaten to report her for assault unless she drops the charges against Peter. Will Chloe concede and will she give Peter an alibi for the time Ken was attacked?

Anna climbs into Phelan’s van with Faye and demands answers. Faye admits he’s been giving her lifts to the Young Offenders’ Unit to visit Seb. In a fury, Anna drives off, stopping away from the street where they have a blazing row and Faye runs off. Back on the street Kevin reveals his surprise hotel booking to Anna. She refuses to go on account of Faye’s meltdown but is Anna using Faye as an excuse to avoid getting intimate with Kevin?

Nick half-heartedly invites Steve to Oliver’s naming ceremony. Sensing he’s not welcome, Steve declines. Leanne’s disappointed when Nick tells her that neither Steve nor Liz can make the ceremony.

When her friends rally round will Shona do a u-turn on her plan to leave the street? ​​​​​​​