Coronation Street 14/10 – Fox and Tyrone weigh up the odds

Fiz and Tyrone do their best to remain upbeat knowing that it’s Hope’s hospital appointment today. At the hospital, the consultant tells them that Hope’s cancer hasn’t spread, she needs chemo but has an 80% chance of recovery. Back at home Maria calls round with some toys for Hope and Mary drops in with a lasagne. Tyrone and Fiz are moved by their show of support.

Desperate to have the building work in the annexe finished, Kylie announces to Jason, Gary and Tony that she’s going to spend the day helping them. In the Rovers, Todd and Tony quiz Sarah wondering if she’s seen Callum. Worried that Sarah might crack under the pressure, David steps in and tells them that Callum’s gone to ground and nobody’s seen him. Back at home Kylie stares at the concrete floor covering the body and breaks down in David’s arms, lamenting that they’ll never be free of Callum as he’ll be in their house forever.

Ken suggests it would be good for Amy to learn a musical instrument. Amy tells Robert she’s prepared to learn the violin to keep Grandad happy but winds Ken and Tracy up by pretending she wants to learn the drums.

When Jamie reminds Luke it’s their big race day tomorrow, Luke tells him to pipe down as he doesn’t want Maria to find out that he’s racing. 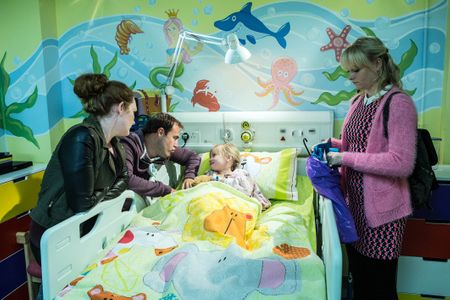 Coronation Street 28/10 - Tyrone reaches the end of the road