Peter and Carla are back from their honeymoon, and obviously Tina can’t leave well enough alone and just forget about the newly-married man she occasionally flirts with, and so decides to confront him at his flat. When Carla opens the door, how will a surprised Tina possibly be able to explain herself? She makes a weak excuse for the visit to a confused Carla, then goes to the Rovers to drink her embarrassment away. Carla suggests to Peter they go too, so Tina promptly tries to make him jealous by flirting with Rob. She then follows Peter outside, but will he confess his feelings to her or will she be left in the cold?

Gail feels like she can’t do anything right, but when a hungover and grouchy Kylie begins to lay into her, Gail finally stands up for herself. Later, she holds a family meeting and declares she thinks David should be able to see the kids, Max and Lily. Nick agrees to everyone’s surprise, but Kylie’s furious at the decision.

Julie has crashed Eileen’s bed with misery, but when she sees a guilt riddled Brian on the street she feels guilty. He tells her he misses her and wants to meet her in the bistro. Brian tells Julie he’s accepted the job in Wales but wants her to move there with him. Julie doesn’t want to leave the street and knows they want different things.

​Elsewhere, Nick and Leanne are annoyed when they hear that a flirty Gloria and Dennis want to hold a gig, and Roy becomes aware that Hayley’s illness is worsening.. 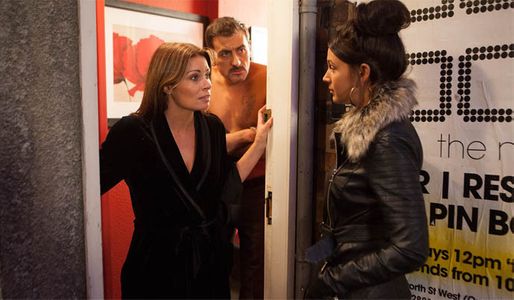