Tina sees Peter is back from Paris and her passions are stirred. He suggests they make the most of their time together while Carla is away, giving her a racelet for her birthday. Steve notices the lights are on in the bookies where Peter and Tina are making love, and since he has spare keys – will he investigate?

A postman delivers a parcel to Roy, and Fiz reckons they should open it in case it gives them a clue to where he is. A police officer then comes over to talk about Roy’s disappearance – will he show up?

Stella is annoyed to find Dennis has spent another night on the sofa. He tries to make amends with Rita, but she tells him she needs some space.

Elsewhere, Todd apologises to Marcus and Maria for ruining their evening when there obviously wasn’t a problem with Liam. Amy dupes Tracy and Steve into taking her to a Victorian Day at a museum.

Peter’s in the shower as Lloyd and Steve burst in. However, Tina is unable to avoid being seen half dressed. Having to think quick, Tina lies that the hot water is off in her flat and Peter tries to look as though he’d just arrived back with his holdall, but how long can they keep the lies up?

Fiz is terrified as Roy’s shopper was found in the canal. Fiz opens the package, but is saddened to see it’s a part of a train set that Hayley ordered ages ago. What will Fiz do if Roy isn’t found?

Ritchie tells a shocked Gloria and Dennis he’s leaving as he’s been poached by an international management outfit. Gloria is left furious when Dennis tells Rita he loves her, and wants nothing more to do with Gloria.
​
Elsewhere, Todd tells Marcus and Maria a sob story about his father. 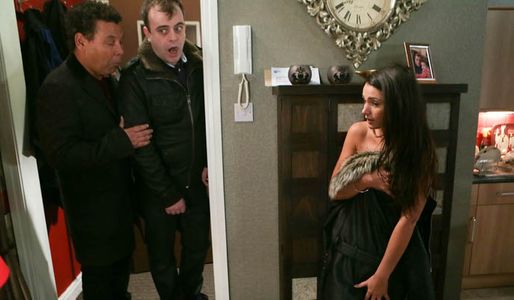