Tracy visits Rob in prison and admits how much she misses him, assuring him there’s been nobody else in her life. Knowing she’s lying, Rob masks his contempt. Tracy returns home and Robert leads her to Barlow’s Buys. Tracy’s taken aback to discover her shop full of flowers. Robert tells her to follow her dream and take up floristry again. Tracy’s touched. Meanwhile telling his cellmate how Tracy has lied to him, Rob vows to have his revenge.

Michael admits to Gail how he’s dreading the awards ceremony and wishes he had the courage to come clean. As the ceremony gets underway Michael arrives at the last minute and Eileen’s relieved to see him. But as Billy reads out the Good Samaritan nominees he’s interrupted by the arrival of Dee with her neighbour Pat in tow. Pointing an accusing finger at Michael, Pat confirms that he’s the man who burgled Dee’s house. How will Michael react?

Fiz asks Beth, Kirk and Sinead if they’ll put up her Christmas decorations at No.9 while she’s out as a surprise for Hope and Ruby. Sinead organises a whip round in the factory to buy some new decorations. Fiz, Hope and Ruby return home and are bowled over to find their living room transformed into a Christmas grotto with a beautiful tree.

In the café, Anna and Kevin compare notes on their forthcoming dates. The factory girls arrive for their Christmas party. Looking a million dollars, Eva flirts with Aidan. Kylie pleads with David to come home, if only for the sake of Max and Lily. Feeling a pang of guilt will David agree?

Tracy thanks Robert for his grand gesture and kissing him, tells him he’s right, it’s time for a change of direction and that a florists is a great idea. In his prison cell, Rob confides in Ian that he intends to introduce himself to Robert.

Dee rages at Michael. Gail rushes to Michael’s defence telling Dee how he burgled her house too but he’s a good man underneath. Eileen squirms with embarrassment. As Billy announces the winner, Michael Rodwell, Michael flees from the bistro. Dee leaves, telling Michael that if he ever tries to contact her again, she’ll report him to the police. Michael apologises to Eileen for letting her down and causing her so much embarrassment. But will Eileen accept his apology?

Fiz leads Tyrone into No.9 and reveals the Christmas makeover. Tyrone’s gutted, explaining he was looking forward to decorating the house with the kids. Sinead, Beth and Kirk leave feeling hurt. Fiz berates Tyrone for his ingratitude over the decorations.

Kylie tells David she wants him back and the kids need their Dad but if he can’t do it then they should call it quits. David’s stunned. Zeedan watches Robert at work and suggests a way he could improve upon a recipe. Robert offers him a job in the bistro kitchen, will Zeedan accept? Finding Aidan alone, Eva wonders what’s the matter. Aidan confides in her that it’s 22 years since his mother died. 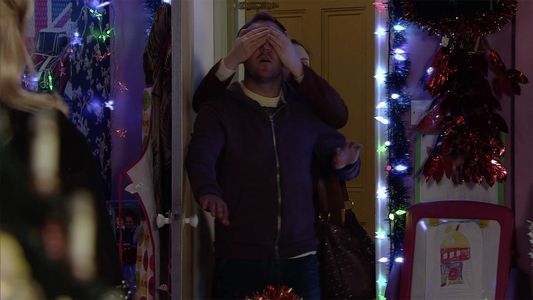