When Tracy lets slip that Steve’s bringing in Amy to see Jim, Peter’s rattled and Tracy demands to know why. Tracy’s shocked as Peter explains Jim was his booze supplier and blackmailed him into persuading Steve to visit. Peter urges Tracy to tell Steve the truth, claiming he doesn’t care what Jim does to him. Will Tracy break the news to Steve and put Peter at risk?

Michael is upset to learn his father died some years ago and arranges to meet an Aunt to find out more. When the Aunt reveals Michael’s dad died in his fifties from a hereditary heart condition Michael’s shocked. Could this mean he’s at risk?

When Tim can’t stop sneezing, Maddie and Sophie are sheepish, realising he’s allergic to Eccles who’s holed up in the bedroom. Is the game up for poor Eccles?

Maddie starts in packing at Underworld and impresses with her efficiency (she’s paying off
her debt to Carla for her not going to the police over Maddie taking her car). Dev and Julie head out for a
drink together leaving an upset Mary to babysit again.

Tracy begs Steve to keep quiet about Jim’s alcohol racket, worried Peter will pay the price, but Steve vows to confront his dad. Explaining how desperate he was to see Steve, Jim defends he had no idea how ill Peter is. Will Steve accept Jim’s story or will he turn his back on his dad for good? Meanwhile is Peter in danger of a beating when Jim storms into his cell?

Michael fears he’s destined to die young like his father and admits to Gail that he’s been experiencing heart palpitations and dizzy spells. Gail insists he needs to see a doctor.

When Maddie and Sophie take Eccles out for a secret walk they’re busted by Ken who spots them in the ginnel. Simon’s forced to explain they were keeping her safe from Tracy, who still insists on having her put down. As Ken appeals to Amy, will she admit she lied about Eccles biting her?

Mary feels threatened by Julie muscling in on her cosy set-up with the Alahans. 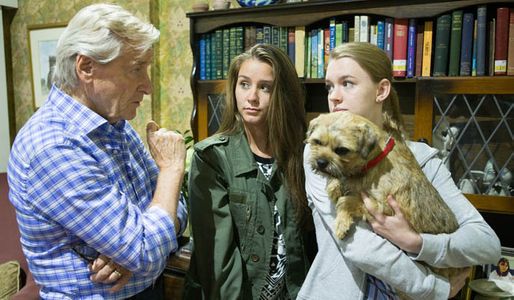