Callum’s mother Marion calls at No.8 wanting answers about Callum’s whereabouts. Kylie and Sarah conceal their guilt whilst David launches an attack on Marion and calling her son a drug-dealing thug, he throws her out. Kylie and Sarah are shocked. Meanwhile when Billy asks after Sarah, David realises with horror that Sarah’s been discussing her problems with the local vicar. Dragging Sarah into the Rovers back yard, David berates her for blabbing to Billy and tells her that if she blabs again, he and Kylie will tell the police that she killed Callum and forced them to cover for her. Sarah reels.

Aidan arranges a meeting with a prospective client. Johnny’s annoyed to discover it’s Matthew Singh, an old friend of his and resolves to beat Aidan to it. Johnny arrives in the bistro and is taken aback to find that Matthew, is the son of the Matthew Singh he knew and that he’s taken over his father’s business. Matthew demands to see the factory’s forecast figures and Johnny realises he’s out of his depth. Kate admits to Aidan that Johnny tried to scupper his meeting, only to find that he’s dealing with Matthew’s son and needs Aidan’s help. Will Aidan agree?

Determined to put her guilty thoughts behind her, Alya tells Gary she wants them to get married at Christmas. Gary’s thrilled.

Maria and Kirk are shocked when they hear their mother has broken her hip. Maria arranges to fly out to Cyprus immediately. Luke’s sympathetic and promises he’ll give up track racing.

David persuades Sarah she’d be best to move back to Milan where she can put the whole Callum saga out of her mind and start afresh. Sarah hands her notice in at the pub telling Michelle she’s returning to Italy as soon as possible. When Sarah breaks the news to Bethany that they’re returning to Milan, Bethany’s upset and tells Sarah there’s no way she’s getting on the plane. When Bethany moans to David about Sarah’s idea of returning to Italy, David tells her it’s for their own safety as Callum has threatened to kill them both. Bethany’s scared witless whilst Kylie’s shocked by David’s vehemence.

​Aidan joins Matthew and Johnny in the bistro, will he manage to rescue the deal and secure a large order?

Alya and Gary discuss their wedding plans with Yasmeen and Sharif.

Jamie calls in the garage and tells Luke he’s put him down to race on Saturday. Luke refuses, explaining he’s promised Maria he won’t race again. But Jamie tells Luke he needs cash from the race to clear his mounting debts. Luke’s aghast when Jamie shows him some old photos of a scantily clad Steph on his phone and threatens to make them public unless Luke cooperates! 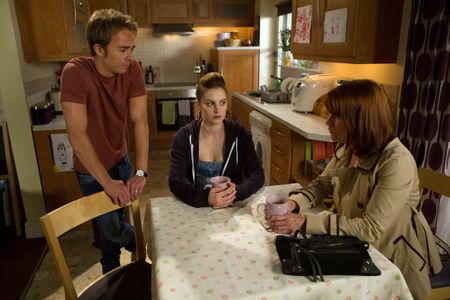