Leaving Hope at Mary’s face-painting class at the community centre, Tyrone heads to the hospital to meet Fiz. At the hospital, the consultant breaks the news to Fiz and Tyrone that Hope has cancer.

Tim presents Kevin with a hideous bracelet for his birthday. Not wishing to hurt Tim’s feelings, Kevin makes out he loves it. Meanwhile as Sally makes the preparations for Kevin’s surprise party, Kevin heads off to Bolton to pick up some parts.

Robert calls at No.1 and demands answers. Tracy finally admits to Robert that she unintentionally caused the fire in Carla’s flat. Tracy assures Robert she never set out to kill Carla. Will Robert believe her? And how will Tracy react when Robert insists she has to tell Carla the truth?

​When Nick heads to work, leaving his wallet in Carla’s flat, Carla pulls out one of Nick’s credit cards and stares at it. Will she take a gamble? Cathy’s determined to conquer her fears of being in her house alone so she can move back home. Simon agrees to behave himself and help out around the flat in return for a new phone. Leanne’s relieved that Simon appears calmer. 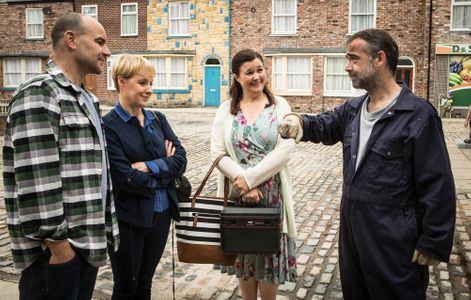