Coronation Street 20/07 - Desperate Dan is out for revenge 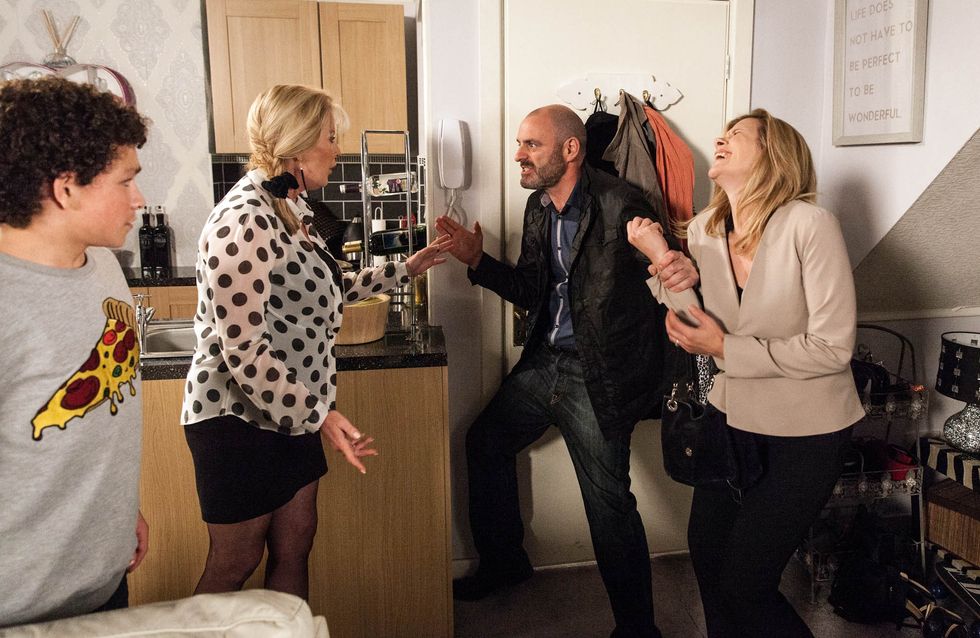 When Leanne realises she’s got to work late, Liz agrees to pop round and give Simon his tea. Dan watches the two women with hatred. Simon’s disappointed to find Liz is looking after him. As Leanne heads home, Dan steps out of the shadows and tells Leanne she’s ruined his life and he’s going to make her pay. Grabbing Leanne by the wrist, Dan forces his way into her flat. Leanne yells at Liz to phone the police but as Liz reaches for her phone, Dan hurls her bag across the room. Leanne, Liz and Simon watch Dan, terrified what he’ll do next.

Robert apologises to Ken for his behaviour after the funeral and spotting Deirdre’s stuffed marrow recipe on the table, offers to cook it for him and Tracy. Is the way to Tracy’s heart through her stomach?

Eileen suggests to Michael they meet later for a drink and Michael agrees. Eileen’s pleased. But when Gail lures Michael round to No.8, making out she’s got a plumbing emergency, will he fall for her trap?

As Roy sets off for his driving test, Cathy awkwardly hands him a good luck card. Vince, a garage owner, calls on Kevin and tells him he wants to make him an offer he can’t refuse. Tony arrives back on the street and braces himself to face the music.

In a rage, Dan demands their mobile phones and stamps on them. Liz and Simon are scared witless whilst Leanne’s clearly in a lot of pain. Liz tries to talk Dan round, telling him she knows he’s a good man underneath, but Dan’s not taken in by her platitudes. Hoping that someone will come to their rescue, Leanne shouts and stamps her feet but Dan wrenches her wrist again, causing her to scream in pain. Dan finally snaps and reveals to Simon how Leanne used to work as a prostitute. Simon’s visibly upset and Leanne reels. Leanne flies at Dan, knocking him to the floor. Grabbing his keys, they attempt to make a run for it. Will they escape Dan’s clutches?

Beth tells Tracy how she met Robert and he’s obviously still in love with her. Tracy’s sceptical but Beth insists she should give their relationship another go.

The tap fixed, Gail persuades Michael to stay for a cup of tea. As Eileen waits for Michael in the Rovers, she worries that Gail will be doing her best to seduce him. Will Michael fall for Gail’s charms?

Roy returns with Tyrone from his driving test. Has he finally passed? Vince tells Kevin he’s retiring and wonders if he’d be interested in buying his garage business. Will Kevin be tempted? Tony is shocked when Jason rails at him for going AWOL. Tony’s ego suffers a further blow when he hears Liz has a new man. Telling Tony he’s best off without him, Jason orders him to clear off. Will Tony get a similar welcome when he heads to the Rovers? 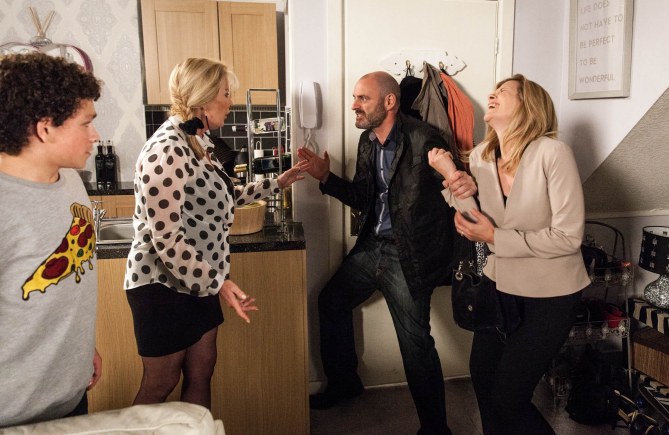