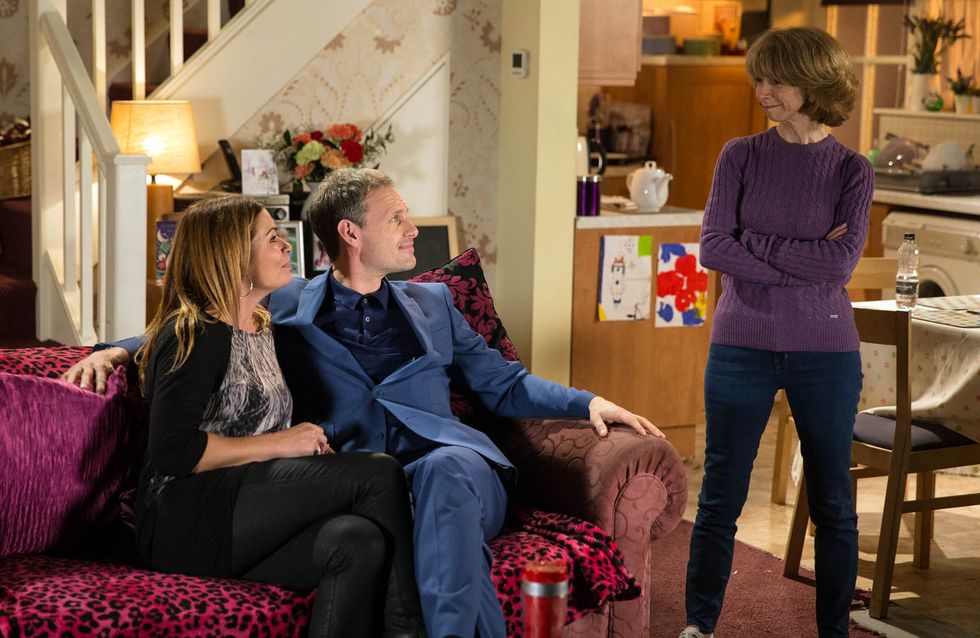 After a sleepless night, Sarah asks the nurse not to tell anyone about her pregnancy. Audrey, Gail and Bethany discuss Sarah’s accident and how she was rowing with David before she tripped. Kylie’s suspicious. In the hospital, Billy tells Gail he’s been worried about Sarah. Sarah assures Gail she wasn’t trying to take her own life and was run over by accident. Unable to contain her doubts, Kylie confronts David, accusing him of pushing Sarah in front of the van to stop her from blabbing! Meanwhile the sonographer shows Sarah her baby for the first time and the enormity of her situation hits home.

When Carla announces that she and Nick are engaged, Johnny and Aidan are thrilled for her. However when they break the news of their engagement to Gail, will she be as pleased?

As Eileen and Sophie shower Michael with praise for his Good Samaritan nomination, Michael squirms with embarrassment. When Nick congratulates Michael on his nomination and tells him the Awards Ceremony will be taking place in the Bistro, he feels even worse.

Telling Craig that her Dad is away, Caitlin suggests he comes round. Nervously, Craig agrees, confiding in Faye that he’s worried about having sex with Caitlin. When Sally hears Kate is having lunch in the bistro, she drags Sophie there and suggests that she and Kate should have a night out together. Will the girls agree?

Carla confides in Michelle she’s worried Nick might be having second thoughts about marrying her. Michelle reckons she’s worrying over nothing. In front of both families Nick produces and engagement ring and getting down on one knee, places it on Carla’s finger. After a pep talk from Audrey, Gail apologises to Carla and welcomes her to the family. Under pressure from Bethany, Johnny and Aidan, Nick and Carla agree to throw a proper engagement party.

David rages at Kylie for thinking he would try and kill his own sister. Kylie realises she’s gone too far and apologises to David for doubting him. But will David accept her apology? Meanwhile Sarah stares at the scan photo of her baby, her mind in turmoil.

Adamant he’s not ready for sex, Craig cancels his date with Caitlin telling her he’s sick. But when Caitlin calls at No.5 she’s upset to realise Craig lied to her. Craig admits he’s not ready to take their relationship to the next level. How will Caitlin respond to this?

Michael confesses to Gail that the reason he’s helping Dee is that he burgled her house and can’t possibly accept a Good Samaritan award as he feels such a fraud. Arriving home drunk, Michael throws his invite in the bin, announcing to a baffled Eileen that he won’t be attending. As Sophie, Kate, Sean and Billy head out for a night on the town, Sally clocks a spark between Sophie and Kate and is pleased everything’s going to plan. Tim warns her that Kate has a fiancé and she’s playing with fire.