Leanne calls at No.1 and admits to Ken that she’s finding it hard to cope with Simon. She suggests Simon comes to live with him for a few weeks and Ken agrees. Simon makes spiteful digs at Leanne suggesting she wants him out of the way so she can drag men back to the flat. But as they set off Simon begs Leanne not to leave him at No.1, telling her he’ll never speak to her again if she does. Will Leanne be able to go through with it?

When Aidan announces to the factory girls that they’ve a huge order and he’s looking for volunteers for overtime, Kate’s disparaging. On behalf of the workers, Kate demands a decent overtime rate but Aidan refuses to budge. Accusing Aidan of exploitation, Kate gathers her things and walks out. Carla’s quietly impressed.

When Michael takes a booking from a customer at 22 Station Road, he’s clearly uneasy. The driver returns to the cab office, moaning that the customer left her shopping in the taxi. When the woman calls in the cab office to collect her shopping, Michael quickly offers to get one of the drivers to run her home free of charge. Eileen’s perplexed.

Luke reveals to Sophie how Jamie has some dodgy photos of Steph which he’s using to blackmail him into racing for him. Sophie’s shocked. Caitlin visits Craig and he offers to teach her his graffiti techniques. As they work on a canvas together, Beth arrives home to find Craig helping Caitlin out of her blouse. Can he convince his mum that it’s not how it looks?

Tracy’s unimpressed to discover Simon has moved in. Ken assures her it’s only temporary. Amy winds Simon up by playing her violin down his ear whilst he’s trying to watch a DVD. Simon grabs Amy’s violin bow and the cousins fight. Ken later finds Simon sitting alone in the dark playing on his phone. Simon bitterly shows Ken a text from Leanne which reads “Goodnight. Love you.” As Simon fails to reply Leanne breaks down, can she stand by her decision?

Johnny lays the law down to Aidan telling him Kate’s still got a job if she wants it. Carla and Michelle drag Kate back to Carla’s flat and over a bottle of wine, try to persuade her to give her job another chance. Will Kate agree?

When Dee, the customer from Station Road, confides in Michael how scared she is to return home alone, Michael offers to go with her and carry her shopping in. Dee’s touched whilst Michael conceals his guilt. What is he up to and how will Eileen react when she realises where he’s been?

Beth gives Craig and Caitlin a talk about the birds and bees. Craig cringes but he’s thrilled when Caitlin confirms that they’re boyfriend and girlfriend but taking things slowly. Sophie tries to placate a suspicious Steph, who’s convinced Luke is keeping something from her, claiming that Luke’s got a lot on his plate at the moment as the garage is so busy. 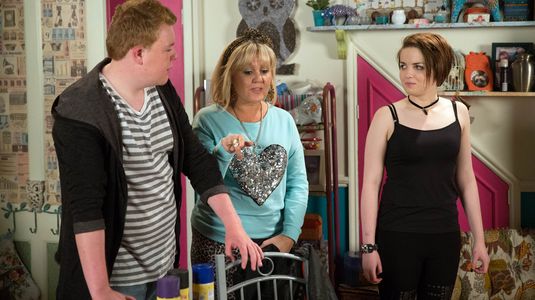