Sean lets slip to Marcus that Todd is in love with someone else. Marcus asks him about it but Todd goes,and Marcus sees he’s left his phone. He goes to return it, but will Marcus be able to resist Todd?

Gloria thinks it’s time to move, but when Dennis finds out, will he want to go with her?

Roy opens the café as usual for Fiz worries it’s too much for him.

A guilt-ridden Marcus gathers his clothes and bumps into a bemused Eileen. She becomes suspicious when she tells Todd about it, and Todd is mysterious. How will Marcus explain where he’s been to an angry Maria?

Dennis is tempted when Gloria tells him to leave Rita to come on a tour of Europe with him. Gloria revs her engine ready to leave in a glamorous new sports car, but will Dennis be able to resist temptation or will Rita be left shocked to the core?

Roy unplugs the phone and plays with his train set, isolating himself.
​
Elsewhere, Valerie calls on Anna to invite her family to the bistro. She doesn’t take no for an answer. 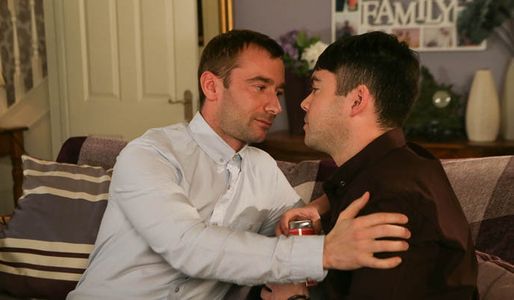