When Eileen confides in Nicola that Phelan’s behaving strangely, Nicola assures her she’s nothing to worry about.

hona can’t believe it when a scratch card Bethany sent her to thank her for all her support wins £6k. Shona’s squeals of delight in the café are witnessed by Zoe, who’s there giving Gemma a hard time. Zoe phones Macca and tells him that Clayton’s Mum has won some serious money. As Shona celebrates her win in the Rovers, Macca arrives and beckons her outside. What does he want?

Clearly stressed, Norris reckons they should abandon the whole marriage charade but Mary won’t hear of it, pointing out how disappointed Jude would be. As Jude arrives with his wife Angie and their baby, Mary can barely contain her excitement.

Chesney looks after Hope and Ruby for the day, but as they try to leave the house for the community centre, Chesney suffers a panic attack. When Liz spots another scam leaflet in the Kabin window, she tells Norris about her plight and asks if she can take the leaflet.

Intrigued by Phelan’s behaviour Nicola follows him. Phelan makes out he’s working on a house conversion and is just disposing of an old mattress. Nicola’s concerned to see a gash on Phelan’s head. What is he hiding? As Eileen and Nicola fuss over Phelan’s injury, Nicola suggests he could donate the mattress to a homeless shelter. At home a stressed Phelan takes his anger out on Nicola who’s shocked by his outburst. Apologising he later shows her a receipt for some mattresses which he’s donated to a shelter. While Phelan is clearly on the edge.

Macca tells Shona that Clayton’s suicidal and £6k would give him the chance of an appeal and a normal life. Shona quizzes Todd, wanting to know if there’s any truth in Macca’s words or if he’s simply trying to take her money. Todd explains that occasionally it’s possible to get someone out of prison on a technicality but it’s unlikely in Clayton’s case.

Having found out that Chesney never showed up at the puppet workshop with the kids, Sinead and Fiz discuss Chesney’s movements over the last few days and are concerned to realise he’s never left the house.

As Audrey and Yasmeen coo over Mary’s grandson, Mary reveals that the wedding will be an intimate affair without their friends present. Angie’s suspicious. Mary’s thrilled when Jude agrees to walk her down the aisle. Liz shows Sean her laptop and explains how she’s adopted a false name and lured the perpetrator of the scam leaflets into exchanging emails. 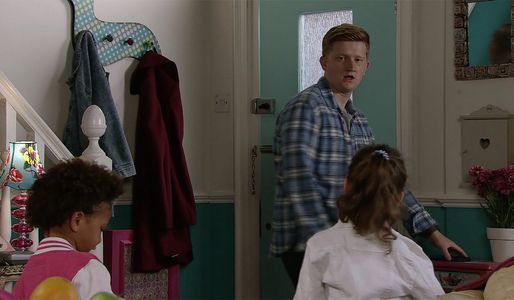