David and Kylie are outraged when Callum saunters into the Bistro. Gail contacts the police and The Platts are shocked to hear they had to release Callum DS Tyler explains that Callum’s on bail and asks the Platts to notify him if he threatens them. Fearing Callum is out for revenge, Kylie, David, Sarah and Bethany agree to stay in pairs, while Gail takes Max and Lily to stay at Audrey’s. Callum turns up at No.8 and offers David and Kylie a deal: get him £20K by tonight and he’ll be gone for good – or he’ll hurt them. Will David be able to raise the cash?

After presenting him with gifts and cards, Roy’s friends wave him off as Cathy whisks him away on his mystery birthday trip. But how will Roy react when his surprise is unveiled - a steam fair in Blackpool, a place with so many memories?

Gary and Tony are taken aback when Jason’s anger shows no sign of subsiding. Jason’s further incensed when Nick reveals that Callum’s out on bail. WhenTony catches Jason about to go after Callum with a crowbar, he attempts to wrestle it from him.

The café’s awash with wedding talk. Sally announces that she and Tim are marrying in the Bistro, while Yasmeen and Anna arrange to discuss Gary and Alya’s big day. Andrea and Michelle prepare Lloyd’s surprise leaving party at the pub. Andrea’s determined to reconcile Lloyd and Steve, and in a desperate bid to get them talking she and Michelle lock the warring pair in the Rovers’ cellar. Craig informs a surprised Faye that he’s got a date.

Desperate to put a stop to Callum’s menacing ways David searches for his nemesis at Gemma’s flat and the Dog & Gun. Frantic Kylie informs Sarah that David’s gone looking for Callum. As the two women fear the consequences for David, the pressure on Callum mounting, will he finally snap and call time on his dealings with the Platts?

Cathy and Roy eat ice creams on Blackpool pier. When Cathy mentions the Tower Ballroom, Roy struggles with the reminder of his dance with Hayley. On the beach, Cathy steels herself to tell Roy how she feels. Will she hold her nerve?

Locked in the cellar together, Steve and Lloyd are united in their outrage at Michelle and Andrea’s tactics. Refusing to beg for their release, they gleefully eye the stacks of booze surrounding them. Will Steve and Lloyd cease hostilities over some alcohol?

Tony takes Jason home to No.11 to rest. Eileen’s furious that he’s still obsessed with revenge, while Tony’s pleasantly surprised when Todd offers to help get justice for Jason. In front of oblivious Tim, Sophie makes digs at Sally about her kiss with Kevin. Can Sally convince Sophie to keep schtum? In the Nazirs’ garden next-door, eavesdropping Anna is thrilled by the juicy gossip. 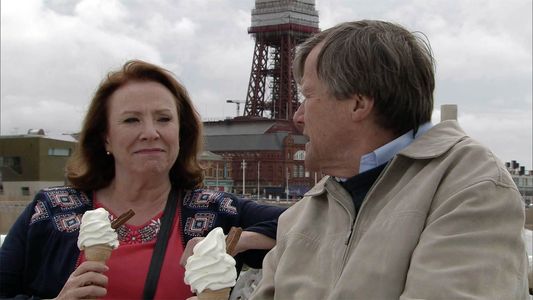