Coronation Street 22/09 – Peter braces himself for the inevitable

Ken and Deirdre are furious to learn that Jim was Peter’s booze supplier and far from protecting Peter like they thought, Jim will now be after his blood.Inside Peter’s resigned when two inmates turn up in his cell and march him off to see Jim. As Ken and Deirdre wait for Peter in the prison visiting room they fear the worst.

Michael tries to back out of going to see the doctor but Gail offers to accompany him. However when he disappears before the appointment a frantic Gail worries that Michael’s had a heart attack.

Todd’s family blank him during breakfast, still blaming him for the chipboard fiasco. Todd appeals to Eileen, promising he’s job-hunting in an attempt to sort himself out, but she makes it clear she couldn’t care less. When Jason announces he can’t stand living under the same roof as Todd so he’s moving in with Eva it looks like the rift won’t be mended any time soon.

Ken and Deirdre are about to report Peter’s absence when he arrives in the visiting room trying to mask his agony. He warns Ken and Deirdre to keep quiet about his beating as he and Jim are quits now and it would only make matters worse. But back on the street Deirdre urges Liz to go and see Jim and ask him to lay off Peter. Will Liz agree?

Eileen’s upset that Jason’s moving out to get away from him. When Todd then overhears a drunk Eileen telling Sean she hates the person Todd’s turned into he’s devastated.


Gail convinces Michael he needs a proper diagnosis and she will stand by him, as she loves him. Michael’s touched but when Audrey and Nick urge Gail to ditch him before she ends up being his carer, will Gail agree that Michael is a lame duck?

Tim’s not happy that Sally didn’t warn him about Kevin’s return. 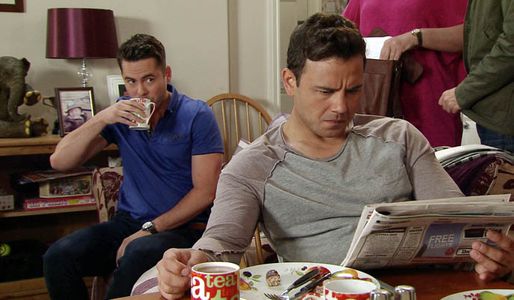