Tensions run high at No.1 as Simon and Amy continue to wind each other up. Ken’s shaken when an irate Simon shouts that nobody wants him anymore. Robert steps in and chats to Simon about his own childhood, making him see he’s lucky to have Leanne. Simon breaks down as Robert hugs him. But when Simon spots a relaxed Leanne returning from a shopping trip, his mood instantly darkens. Alone in the house doing their homework, Amy and Simon row. Amy makes to phone Tracy but Simon snatches her mobile and throws her against a wall. How far will Simon go?

Jamie phones Luke to finalise arrangements for the race today. As he collects him from the garage, Sophie’s aghast to realise where he’s going and guiltily informs Steph that Luke’s competing in an illegal race. Steph and Andy set off in hot pursuit. Arriving at the track they’re horrified to see Luke behind the wheel.

When Izzy drops her shopping in the street, Jake runs off while she’s distracted. Alya catches Jake and Izzy’s grudgingly grateful. But when Alya ruefully suggests that Gary might have been better off sticking with Izzy, Izzy’s offended and Alya beats a hasty retreat.

Dev offers to help Erica settle into the shop flat. Mary’s concerned that Dev getting involved with another woman will unsettle the twins. Dev assures her he has no designs on Erica but Mary’s unconvinced.

Ken, Nessa and Tracy enter No.1 to find Amy fending off Simon. Amy reveals that Simon hit her. Tracy’s incensed and goes looking for Leanne. Leanne arrives to question Simon but he shows no remorse and Eva forces Leanne to admit how Simon’s physically abused her for months. Ken, Tracy and Robert are stunned as Leanne breaks down, pouring her heart out to the Barlows. Ken’s full of sympathy but how will Tracy respond to Leanne’s revelation? As Simon moves back home, Leanne vows she won’t give up on him. But is Simon as determined to turn a corner?

Trackside Steph watches Luke in anguish. He wins the race and Jamie rejoices as he collects his winnings but Steph’s furious. Driving home Luke confesses he only raced because Jamie blackmailed him using nude photos of her. Steph’s sickened. She confronts Jamie, ordering him to delete the photos, but Jamie has more debts and wants Luke to continue. Luke urges Steph to tell Andy about Jamie but she’s too afraid of losing him. Will Luke be forced to race again?

Yasmeen’s annoyed as Sharif continues to give Alya the silent treatment. But when Alya bursts into tears upon learning that Gary’s coming home, Sharif’s hostility evaporates as he comforts her.

Mary looks on disapprovingly as Dev flirts with Erica over a drink in the Rovers. When Mary explains her concern for Aadi and Asha, will Erica allay her fears? 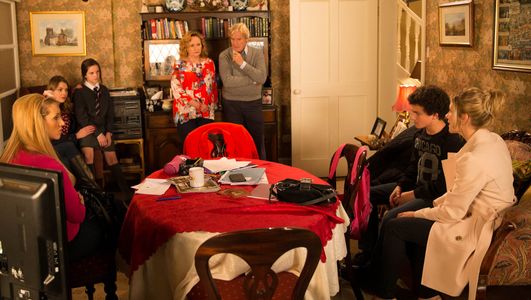