Kylie looks terrible as she drags herself to work hungover and Leanne tells her to pull herself together. She begins to flirt outrageously with Kal and makes an announcement, but what about?

Carla asks Tina to take care of Simon. Peter calls Tina and asks to meet her so they can discuss babysitting, but let’s face it, he has other things he wants to talk about as well.

Roy is worried as Hayley’s painkiller dosage is upped.

​Elsewhere, Steve meets Andrea on the pretext of going food shopping, and Sally is saddened when she hears Rosie won’t be coming home for Christmas.

Leanne orders Kylie out of the Bistro after she makes a complete nuisance of herself. Leanne tries to reason with Kylie and reveals Nick’s mood swings to her, but can Kylie be trusted to keep the information to herself?

Peter tells Tina they should keep their distance, which quickly falls through as they start kissing, with Tina leaving red splotches all over Peter from where she’d been finger painting with Simon. Carla comes home and Peter dives into the bedroom to change.

Hayley doesn’t think the chemo is working, but she is still determined to enjoy Christmas.

​Elsewhere, Steve’s friend Andrea shows up at the Rovers and Michelle is immediately jealous. Sophie announces she plans to spend Christmas helping at a soup kitchen. 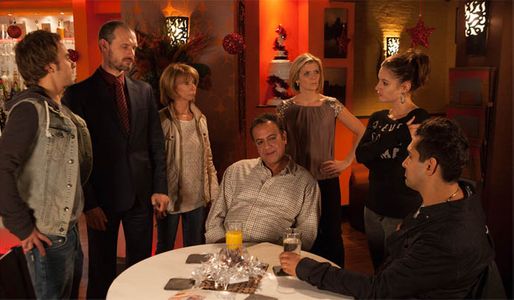