As Peter helps Toyah with her IVF injection she tries to bury her suspicions about the money. Meanwhile when a cash buyer arrives at the pub, Peter’s stunned to see it’s Chloe and Steve and Liz are considering her offer. Peter angrily steers Chloe outside and orders her to stay away from both him and the street. Ken clocks their exchange. Finding Chloe alone Ken approaches her. Chloe explains she’s had a row with her boyfriend Peter. Taken aback Ken invites her back to no.1 to talk.

Daniel searches in vain for Sinead, while Beth worries about her niece. Ken apologises to Daniel and assures him he only wants what’s best for him. When Daniel reveals that Sinead is pregnant and he loves her very much, Ken feels terrible.

Anna orders Seb to stay away from Faye. Seb attempts to apologise to Faye for his behaviour but worried Anna will see them Faye rushes inside.

Tracy’s deflated when the bank turn down her loan application for the florists. She begs Ken to lend her the money but is left fuming when he disagrees. Todd forms a plan to wind up Phelan and pretend there’s ghostly goings on in the builders flat.

Chloe spreads her poison, telling Ken how she and Peter are having an affair, he’s drinking again, she leant him £2k and she’s planning to buy the pub simply to stop Peter from ruining his life. Ken’s horrified and with heavy heart breaks the news to Toyah of Peter’s drinking and affair. Will Toyah believe what she’s being told about Peter?

In tears, Sinead tells Daniel she’s had a miscarriage and he’s free to go to Oxford. Daniel hugs her, devastated.

Having bought an old violin, Amy then smashes it up before duping Ken into giving her £200 for a replacement, promising she’ll play at the community centre concert on Monday. Meanwhile Tracy finds Ken’s will at no.1. Will she look inside?

Thinking she’s doing a good turn, Rosie resolves to get Seb and Faye back together. Will she succeed? ​​​​​​​ 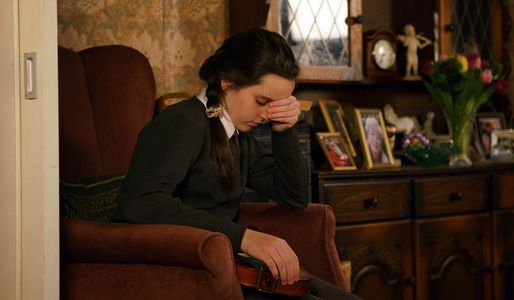 Coronation Street 08/04 - Faye confronts the father of her child

Coronation Street 30/12 - Anna Has The New Year From Hell