After spending the night together, Tracy and Robert are clearly loved up. Ken’s pleased to see them back together. Bumping into Tony, Robert’s scathing as Tony reminds Tracy he still owns half the shop and is going nowhere. When Tracy receives a text from Robert cancelling their evening together as he has to work, Beth suggests they pay Robert a visit at his restaurant. When Tracy and Beth, Robert feigns delight. But as Tracy pulls him in for a kiss, Joni enters the restaurant revealing that she’s Robert’s wife!

Suited and booted, Kevin tells Sally he’s off to see his bank manager about a business loan. Sally wishes him luck whilst Tim feels inadequate. Whilst cleaning the Kabin windows, Tim confides in Craig how he worries that he’s not good enough for Sally. Upon hearing music playing, the factory girls head out to see what’s going on. Sally’s stunned to see Tim, smartly dressed and clutching a bunch of flowers. Tim goes down on one knee and proposes to Sally.

When Bethany calls at Callum’s flat he explains he’s got work to do but suggests she accompanies him. Bethany’s delighted. Callum dupes Bethany into buying a stash of drugs on his behalf. As Bethany accepts the package, Callum secretly films her on his phone.

Beth finds a holiday brochure hidden under a cushion and assumes Kirk has booked a surprise holiday for them. Telling Kirk he’s the best husband in the world she says she knows about his secret plans for a holiday. Kirk’s bemused. Luke’s plans to go and look at a stock car are scuppered when Maria asks him to babysit for Liam. Gail accuses Eileen of trying to steal her husband.

Robert desperately tries to explain himself to Joni and Tracy. Joni turns on Tracy accusing her of ruining her marriage as Robert was always clearly obsessed by her. Tracy arrives home in floods of tears and explains to Ken how Robert is already married. Robert calls at No.1 and assures Tracy his marriage to Joni is over and he never stopped loving her. Will Tracy accept this?

Callum and Bethany meet with Gemma in the Dog & Gun. Callum plies Bethany with vodka and invites the girls back to his flat. Callum forces Bethany to smoke a joint and captures it on his phone. When Bethany arrives home drunk Sarah suspects she’s been up to no good. Meanwhile Callum admires his photos of Bethany, telling Gemma they could prove very useful.

​When Sinead reveals she’s booked a camping holiday in Wales for herself and Chesney, Beth realises she got the wrong end of the stick. Aware of Beth’s disappointment, Ches suggests they all go together and invites Tyrone and Fiz along too. How will Sinead react? Tony grovels to Jason for letting him down. Realising she scuppered Luke’s plans, Maria resolves to make it up to him. 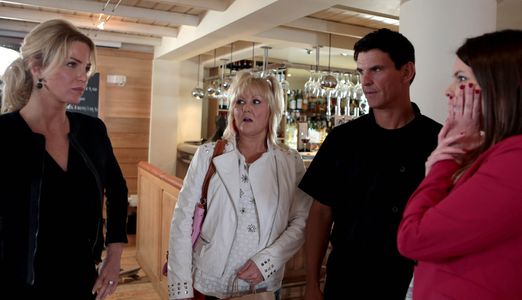