Kal and Leanne decide to tell Nick they like each other, but Nick clearly thinks he and Leanne are sorting their relationship out and before Kal can get in there Nick chats to him about his plans to win Leanne back. As Leanne gets ready to tell Nick what’s going on, will his bombshell stop her in her tracks?

Liz tells Anna off about her cleaning skills. Owen leaps to Anna’s defence only to be snapped at by Anna, who tells him not to interfere.

Tyrone tells Maria that Fiz is going to report Kirsty to the police so David tells her to throw her phone away, but will Maria confess before it’s too late?
​
Elsewhere, Deirdre’s pleased to hear about Rob and Tracy’s engagement, Kal guilts Steve and Lloyd into doing a charity run, and Izzy uses some of the charity money to pay for her shopping after she forgets her purse.

Leanne feels awful when Nick tells her he can’t live without her. He later tells Kal he wants Leanne to take him back. Desperate not to break Nick’s heart, will Leanne tell him the truth about her and Kyle, or let him think he has a chance?

Owen wonders about Anna’s feelings for him, and wonders what’s going on with her.

Tyrone’s angry with Fix for getting the police involved, but Maria’s relieved when Tyrone tells her the texts came from a pay as you go phone so it’s difficult to trace. A confident Maria sends Tyrone another text.
​
Elsewhere, Steve joins the gym, wanting to outrun Lloyd in the charity run. Rob and Tracy celebrate their engagement in the Rovers. Gary hands Izzy £49 he earned on a building site but Izzy spends it, and when Lloyd suggests he stays the night at Andrea’s, she makes out her boiler’s broken so they should stay at his instead, but why? 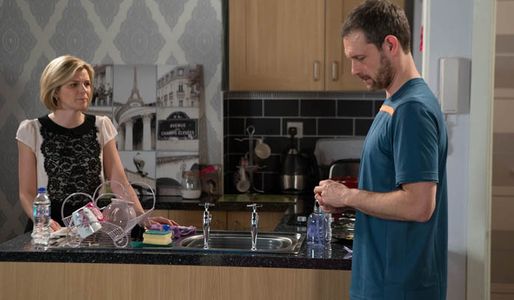