Jason makes a start on Tyrone’s loft conversion. Tyrone’s impressed but as he admires Jason’s work he suddenly falls through the boarding into the bedroom below where he lies unconscious.

Kylie hands David a list of jobs to do for Lily’s birthday party. But when Max starts playing him up David’s forced to bribe him with chocolate, which ends up smeared on Steve’s campervan (which he has just bought and cleaned up for the wedding company he and Michelle are launching). With the party in full swing Kylie and David are fraught as Max’s behaviour causes utter chaos. Kylie’s devastated, convinced everyone blames her for being a useless mother.

When Steph cancels their night on the town, Luke takes the opportunity to invite Katy instead; does he have an ulterior motive?
​
Elsewhere, Steve isn’t keen to visit Peter in prison.

As Tyrone lies trapped under fallen debris he regains consciousness and calls for help. Returning to the house Jason phones an ambulance. Tyrone’s rushed to hospital while Todd and Gary survey the damage at No.9. Gary angrily points the finger at Todd, blaming him for the accident by using sub-standard boards. Tony’s horrified as he realises Jason could be in real trouble!

As Kylie tries to get Max under control Gail rushes in and announces that Lily has taken her first steps, Kylie’s gutted she missed it. As Max’s disruptive behaviour continues the party comes to a close. Upset, Kylie blames herself for his behaviour.

Luke and Katy’s night out is put on hold when they race to help Jason lift Tyrone to safety.
​
Elsewhere, Michelle assures Steve that he has her blessing and should visit Peter in prison. Dean (landlord of the Flying Horse) comes into the Rovers and brags to Steve about how good business is in his pub. When Steve then suggests they could hammer his pub team at cricket, Dean tells him another team has pulled out of a fixture in a couple of weeks. Dean and Steve shake hands on a match. Steve then sets about hastily putting a cricket team together. 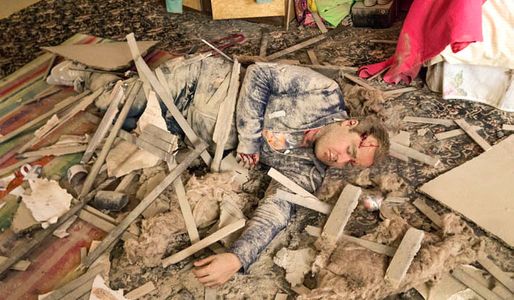