Leanne calls at No.1 and reveals she’s taking Simon to a therapist. Tracy’s scornful, clearly jealous of Robert’s friendship with Leanne and Robert’s disgusted. Tracy gets dolled up to sit in the Bistro, hoping to win Robert’s forgiveness. But when Tracy spots Leanne talking to Robert she flies into a jealous rage, laying into Leanne and calling Simon a thug. Robert’s furious and, telling her she’s gone too far, throws her out. Is it the end for Robert and Tracy?

Gary arrives back on the street. Zeedan and Sharif are shocked when he turns up in the gym and makes it clear he’s still a partner in the business and intends to stay involved. Sharif points out that Gary’s share of the gym was a wedding present, but Gary argues he signed on the dotted line and needs the income to provide for Jake.

Andy suspects that Steph and Luke are hiding something from him concerning the race. Luke urges Steph to come clean. Meanwhile Steph summons Jamie and implores him not to tarnish their past relationship by publishing the photos. Spotting them together Luke steams in and threatens Jamie, how will he respond?

Mary goes UFO spotting with Brendan for the night, so Dev invites Erica round to watch TV. Erica mistrusts Dev’s motives but Dev assures her he’s not planning a seduction. As Dev ribs Erica for assuming he fancied her, Erica teases Dev about his own vanity and they begin to warm to each other. 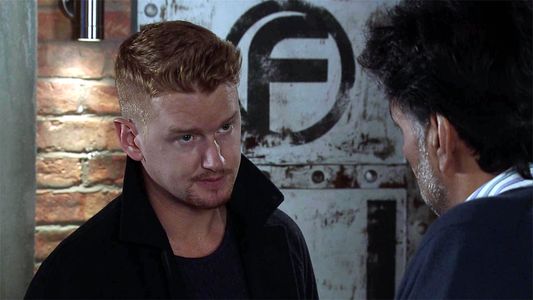