After crushing Maria’s secret mobile into the pavement, Aidan takes Maria back to the flat, determined to prove their days of sneaking around are almost over. But as he hooks up his tablet to play music via the TV and heads for the bedroom, Aidan fails to spot a text from Eva, revealing she’s coming home early. Back from France, Eva confides in Leanne that she might be pregnant. Back at the flat Aidan’s forced to hide a half-dressed Maria but will he get away with it this time?
​

Phelan wears a tie for work and tells Eileen he’s after a new contract. But when Eileen sees Phelan getting into a car with Nicola (she’s agreed to let him accompany her and Seb to an ex-offender’s talk in Liverpool) Eileen secretly fears he’s got another woman. As Phelan does his best to make a good impression on Nicola, after she walks in on him having a set to with Seb, we’re left wondering why he’s so keen to impress her?
​

When Robert reveals he’s raising the money to buy Nick’s share of the Bistro, Michelle suggests she could buy it with her proceeds from the Rovers’ sale. How will Robert respond? When Michelle then bumps into her ex Will, she agrees to join him for a catch-up.
​

Daniel hides when Ken calls in the Bistro to wish him luck for his degree results. Kevin offers to babysit so Dev can take Erica out. Dev’s grateful, unaware of Kevin’s guilty conscience.
​

Eva’s stomach turns as the reality kicks in that Aidan and Maria are having an affair. Incandescent, Eva flies out to confront Maria but bottles it as Liam is with her. Leanne tells Eva that her pregnancy test was negative. But checking for herself, she sees a blue cross, indicating positive. Eva resolves to do another test and nervously awaits the outcome. Aidan sits Eva down, finally ready to dump her for Maria, but Eva has a bombshell of her own!
​

Nicola, Phelan and Seb arrive in Liverpool. Phelan looks around wistfully as he shows them some of the local sights from his youth. But when Phelan starts to press her for details of her parents, Nicola feels uncomfortable and suggests they head home. Why is Phelan digging? Eileen quizzes Phelan about his day and quietly fumes, knowing he’s lying to her.
​

Will sympathises as Michelle recounts her recent tough times with Steve. Hearing about her new partner Robert, Will admits to a pang of jealousy but insists he’s pleased for her. Robert’s alarmed when Rich turns up in the Bistro. While Daniel distracts Michelle, Robert throws Rich out but fears he’s not seen the last of him.
​

​Erica’s taken aback when Dev announces they’re going out as Kevin’s agreed to babysit. Erica thanks Kevin for helping out and it’s clear there’s a spark between them. Daniel reveals to Michelle and Robert that he only passed his degree with a 2:2 so Oxford’s out of the question. 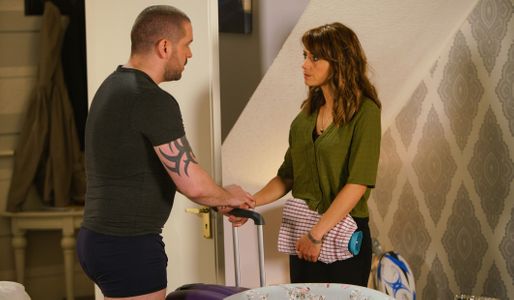