When Neil overhears Lloyd talking to Michelle about her wedding planning business he’s shattered, thinking Lloyd is talking about marrying Andrea. Using Tim’s ladder (and leaving Tim stuck on the roof of No.4) Neil climbs onto the roof of the Rovers, insisting he’ll only speak to Andrea. Stranded Tim’s forced to watch on as Neil tells Andrea he’ll only agree to come down if she breaks off her engagement to Lloyd and returns to him. Incensed, Andrea climbs up the ladder and begs him to stop messing about. But when she slips and is left clinging to the guttering, it looks like Neil’s stunt could have very serious consequences?

Eva takes pity on homeless Todd and invites him to stay at her flat. How will Jason react?

A nervous Michael heads to the doctors.

Maddie’s taken aback when Carla pays her some wages and offers to make her a
permanent fixture at the factory. Will Maddie accept? Beth plans the wedding of her dreams.

Eva tells Kylie she’ll have to confess to David before he realises some of Max’s pills are missing. Consumed with guilt Kylie psyches herself up to confess but will she be able to bring herself to tell David the awful truth?
​

As Andrea hangs from the side of the Rovers a petrified Neil reaches out to her. Lloyd desperately tries to grab hold of her from an upstairs window but he can’t reach and the onlookers gasp as a tired Andrea loses her hold. Will Neil pull her to safety in time?

When Kylie bumps into a short-staffed Nick outside the Bistro she offers her services. David’s furious to find her working and demands she comes home. Will Kylie agree? Meanwhile when Eva asks Kylie if she’s had any more of Max’s pills she’s shocked by her confession.

Jason’s livid to find that Eva has invited Todd to stay and storms out of the flat, saying he can’t stay while Todd’s there.

Michael’s referred to a genetics clinic for tests to determine if he has a heart condition. Tim’s embarrassed as it’s left to Kevin to help him down from the roof. As Sally takes Tim in her arms Sophie’s notices Kevin looking wistful and later asks him if he still has feelings for Sally. 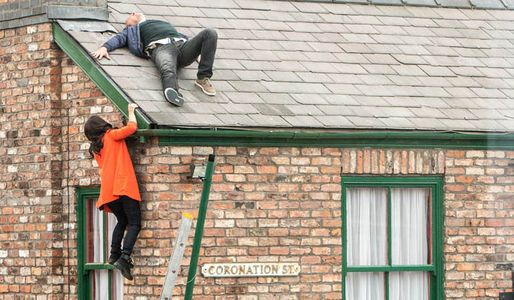 Coronation Street 12/09 – Will Kylie confess to her new low?