Coronation Street 26/10 - Tyrone's AWOL when Fix needs him most

Kevin cracks the whip as he shows Tyrone and Luke the fleet of cars parked outside the garage which all need servicing. Having broken one of Hope’s toys that morning Tyrone seizes the opportunity to swing by the toy shop when a motorway breakdown comes in. But when Hope is taken ill and Fiz is unable to get hold of Tyrone, she heads off in an ambulance asking Kevin to let Tyrone know what’s happened. Tyrone returns to the garage and is shocked to hear Hope’s taken a turn for the worse.

When Gary quizzes Alya about her plan to elope, Alya backs down and makes out she’s just nervous about the wedding. Sharif and Yasmeen call at the Windasses and announce they’d like to make Gary a partner in the gym. Gary’s stunned at their generosity.

Ken calls in the salon for a trim and his growing affection for Audrey is evident. As Ken pays for his haircut, he persuades Audrey to meet him for a drink later.

Feeling taken for granted by Dev, Mary seeks some escapism in a magazine about the supernatural.

Unable to find a parking space, Tyrone abandons the tow truck in front of the hospital entrance and dashes in. Fiz explains to Tyrone that Hope has got an infection and has to stay in overnight. Tyrone’s horrified to discover the truck has been towed away and it’ll cost £300 to get it back from the pound. As Tyrone returns home for Hope’s overnight things, Kevin calls and tells Tyrone that after explaining Hope’s situation the towing company waived the fee and returned the truck. Back at the hospital Tyrone tries to assure Fiz they will get through this together.

Sharif and Yasmeen invite Gary and Anna for dinner to celebrate Gary’s new job. Gary, Alya, Anna and Zeedan gather at No.6 where Sharif and Yasmeen announce that Gary is joining the family business. Alya paints on a smile whilst masking her guilt.

Mary laments to Rita, Norris and Emily that she’s suffering from ennui, her life lacks excitement and she wishes she had friends her own age. Realising her Dad is struggling with his increased workload, Sophie helps Kevin out in the office. 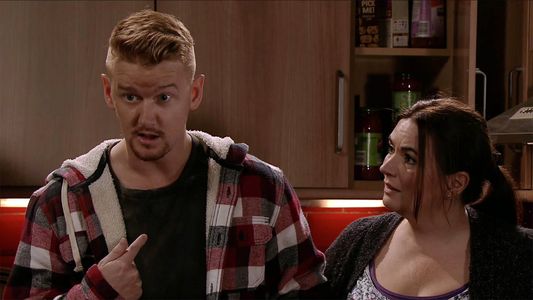 Coronation Street 26/10 - Can Sarah Risk The Temptation Of Gary?